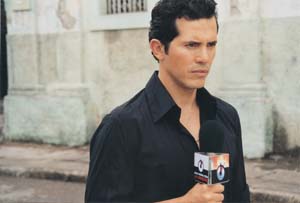 During a recent interview on NPR, John Leguizamo discussed his difficulty switching gears between English and Spanish on the set of this, his first Spanish-language film, necessitating the hiring of a tutor to help render his dialogue transitions more fluidly lifelike. It worked. As Manolo Bonilla, the star field reporter for the Miami-based television newsmagazine One Hour With the Truth, his rapid-fire Spanglish is like a blustery showman’s pitch – frantic, narcissistic, and oozing enough reptilian self-import to help bed his married producer Marisa (Watling) while they’re on assignment in Ecuador. That assignment, and not the affair, is at the heart of Cordero’s grim meditation on the abuses of power by the members of the media, specifically purveyors of television. Like those lurid Mexico City scandal sheets that regularly feature front-page images of hapless citizens bisected by midnight locomotives, Manolo’s Hard Copy-styled program doesn’t so much hang out with the Truth as exhume its corpse and perform a fisty post-mortem, all the while keeping the shot tight on la Verdad’s dead eyes and rictus grin. Manolo, Marisa, and camera operator Ivan (Yazpik) arrive in the tiny village of Babahoyo seeking an interview with the relatives of children killed by the notorious "Monster of Babahoyo," a serial killer who has already raped and tortured some 150 children across the length of South America. Moments after Manolo uses his not inconsiderable charm to line up a morally questionable interview with the twin brother of one of the dead boys, Vinicio, a local Bible salesman, drives into the scene and, distracted, accidentally runs down and kills the little boy. The crowd, already hysterical, drags Vincinzio from his car and beats him to a pulp; worse, the dead boy’s father, Don Lucho (Layana), douses the poor fellow with petrol and tosses a match. Manolo’s cameras catch it all and only at the last minute does he step into and stop the vigilante mob, as local police Captain Rojas (Luzuriaga) dawdles helplessly at the sidelines. It’s a slam-bang, grab-you-by-the-throat opening for a film about media exploitation and one of the best cinematic kickoffs of the year, but Crónicas has other ideas as well, not all of them as interesting. Imprisoned for the accidental killing, family man Vinicio begs Manolo to help exonerate him, and dangles some juicy information about the identity of the Monster of Babahoyo as a lure. Manolo bites – how could this preening egocentrist not? – and thus begins the devolution of Crónicas into a far more standard exercise in south-of-the-border tabloidism that lacks the ghastly, cynical bite of its earlier scenes. Is traveling salesman Vinicio the monster, or just another victim of circumstance? It’s not hard to figure out, and the more the story plumbs the depths of the crusading (albeit slimy) reporter, the less it seems like the unique film it started off as. Cordero’s previous film, 1999’s excellent Ratas, Ratones, Rateros, wallowed in the criminal muck of Ecuador’s streetwise youth to far more cohesive effect. Here, Leguizamo is the show, and his back-and-forth with potential psychopath Alcázar (both of whom manage gripping, electric performances) reminds you of a particularly brutal episode of Law & Order crossed with one of Nancy Grace’s walloping reportorial broadsides. Like its protagonist, Cordero’s film is a nimble thing, darting from hot-button topic to prison-cell metaphysics in the blink of a blind eye, but it never quite achieves the level of journalistic condemnation it so clearly seeks.