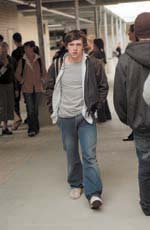 Angry, maybe-crazy teen rebellion. Overmedication. Clueless parents. Otherworldly visitations. Intimations of the apocalypse. If The Chumscrubber sounds familiar, that’s because it hits the same beats as 2001’s cult hit Donnie Darko, only far less effectively. No 6-foot fanged rabbits here, but high school outcast Dean (Bell) does see visions of his best friend, Troy, a small-time dealer and recent suicide. Troy’s death blindsides their suburban community, but that’s no surprise considering everyone – children and parents alike – are pleasantly konked out on doctor-prescribed pills or the approved libation of ladies who lunch: red wine. The only ones who really appear rattled by the suicide are Troy’s teen clientele. Knowing Troy left a motherlode behind, a trio of classmates – Lee (Pucci), Crystal (Belle), and grade-A asshole Billy (War of the Worlds’ Chatwin) – try to convince Dean to retrieve the drugs. When he balks, they kidnap Dean’s little brother to put on the pressure … only they kidnap the wrong kid. The kidnapping plot, along with pill-addled Dean’s increasingly nightmarish visions of Troy, would be enough to fill a whole movie, but first-time director Posin and scripter Zac Stanford are also juggling five sets of wildly dysfunctional parents. The parents are drawn rather broadly – some are downright cartoonish – which makes for an ill fit when the filmmakers attempt to puncture the adults’ plastic facades with the occasional stab at profundity. The kids fare better, especially that one-time dancing scamp, Billy Elliot’s Jamie Bell. Following up his gritty performance in Undertow, Bell proves once again that he’s a compelling screen presence, but The Chumscrubber too often loses sight of him in favor of far less interesting detours into the perils of suburban living. Those perils, by the way, are dramatized in the form of "the Chumscrubber," a video game/cartoon amalgam in which a beheaded teen survives the apocalypse and swings his detached head at an army of zombies. (Dean eventually begins to confuse the fictional Chumscrubber with his dead friend). It’s an interesting conceit, but the filmmakers introduce the Chumscrubber a bit late, and his final-reel "payoff" is more of a piffle. There are a few very darkly funny moments, and some genuine shocks, including the best eye slice since Buñuel and Dalí took to a sheep. But The Chumscrubber, a soft satire at best, is dogged by a feeling of been-there, done-that. It’s a Big Idea movie that comes out only half-baked. 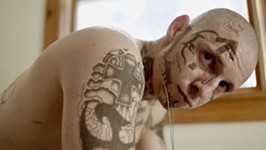 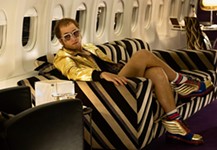