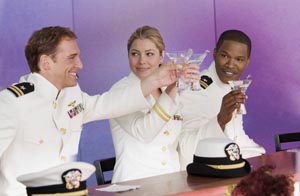 The boys and girls of summer get a Mach-5 work-over in the newest big bang theory from Rob Cohen (XXX, The Fast and the Furious), which semicompetently welds 2001’s amoral HAL 9000 computer to the Top Gun school of flight- and filmcraft, making for a supremely silly but ultimately fun popcorn shoot-’em-up. The twitchy tweener next to me offered running commentary along the lines of "awesome!!!" and "kickass!!!", but Cohen’s film, despite its video-game, user-friendly toggles – clearly marked "Adrenaline" and "More Adrenaline" – plays like a slapdash assemblage of the greatest hits of conspiracy-minded action cinema. Apart from the pointedly obvious Kubrick and Tony Scott references, Stealth also mines everything from John Badham’s 1983 renegade chopper opus Blue Thunder to, uh, John Badham’s 1983 renegade computer opus WarGames, and, just for laffs, John Badham’s 1986 war-bot comedy Short Circuit. Sadly, the humor here is apparently unintentional and Ally Sheedy is nowhere to be found, but tonal quibbles such as these pale when confronted by the sheer Richter-trembling magnitude of Cohen’s bravura use of CGI and a 100-ton gimbal (used to spin and gyrate the actors inside the prop-cockpits), courtesy of Digital Domain and special effects supervisor John Frazier, respectively. The script, from sometime genre favorite W.D. Richter (Big Trouble in Little China), is a hamfisted collection of cornball military clichés that frequently cross over into Absurdistan airspace before vectoring back toward the friendly skies of sci-fi, but even that fails to put much of a dent in the mental-whiplash-inducing forward motion of this two-hours-plus film. (To Cohen’s credit, it feels like a swift 90.) The plot? Elite U.S. Navy fliers and Best Friends 4-Ever Gannon (Lucas), Wade (Biel), and Purcell (Foxx) are assigned a new wingman by their thorny overseer Capt. Cummings (Shepard, doing Chuck Yeager gone sour). The new wingman is not a human being but instead an Unmanned Combat Aerial Vehicle acronymed EDI (for Extreme Deep Invader), which was created by the Navy and Richard Roxburgh’s Dr. Keith Orbit in the hopes of someday replacing flyboys (and -girls) altogether. Team leader Gannon has his doubts and says as much after the robotic EDI disobeys a direct order and turns a nuke-empowered terrorist cell into pink mist in the mountains of the former Soviet Union, but like Plan 9 From Outer Space’s crusading pilot Jeff Trent, he’s "muzzled by Army brass." Well, Navy brass, really, but either way a conspiracy is afoot and when EDI is struck by lightning after a particularly treacherous mission, the UCAV begins to think for itself and decides, not unwisely for the benefit of the audience, that it’s fun to blow things up. What follows is a circuitous route to redemption for almost all involved, replete with WW III-inducing skirmishes with the Russian Federation air force and despot-du-jour Kim Jong Il. It’s Hollywood hokum in extremis, and while the Gannon/Wade romantic-competition subplot threatens to ground the film every quarter-hour or so, Cohen’s mastery of the big-budget aerial action sequences repeatedly acts as a epinephrine jab to the heart of what might have otherwise been a high flying DOA.