It’s been a long time since The Computer Wore Tennis Shoes and The Barefoot Executive, two of Kurt Russell’s career highlights from his early years as Disney’s in-house teen, but the actor has finally returned to the Magic Kingdom. (It’s almost as if Snake Plissken never happened, heaven forfend.) Russell’s film roles have always ranged among action, comedy, and romantic leads, hitting something of a trifecta with John Carpenter’s 1986 cult favorite Big Trouble in Little China, and it’s a rare thing when a Kurt Russell film isn’t at least entertaining. His finely honed combination of aw-shucks naturalness and studied sense of laissez-faire comic timing has saved more than a few mediocrities from the direct-to-video fate they would have surely shared had Russell not been on board (say, Captain Ron, for example). So it’s not surprising that he’s the most interesting thing in Sky High, even if he seems to be playing a live-action version of Mr. Incredible much of the time. As the egocentric Commander Stronghold, he lives incognito with heroine wife Josie Jetstream (Preston) and son Will (Angarano), who on his first day at the titular high school for superhero offspring has yet to acquire his own superpowers. Divided into "heroes" and "sidekicks" by gung-ho gym teacher Coach Boomer, aka Sonic Boom (Campbell doing what he does best, once again), the momentarily disconsolate Will ends up tagged as hero support and makes fast pals with a quartet of other sidekicks, including a hip-hop-prone valley boy who glows ("Maybe if we could dim the lights you could see it a little better," he tells a skeptical Coach Boomer) and a surly alterna-girl whose limited shape-shifting abilities only allow her to morph into a guinea pig. His best friend since the sandbox days, Layla (Panabaker, of Wonder Falls), is crushin’ on him like mad, but with his pubescent romantic radar as yet ill-attuned, all Will can think about is his newfound archenemy, the fireball-tossing Warren Peace (Strait), whose father was vanquished by Will’s dad back in the day. It’s a spiffy set-up, but ultimately a dull and thoroughly predictable one, despite some great turns by Leachman, as the school nurse, and Kids in the Hall alumni Foley and McDonald, as teachers who pine for their sidekick glory days. That former Wonder Woman Lynda Carter is Sky High’s unflappable principal is such an easy gag that it fails to elicit much of a laugh (not to mention that the film’s target tweener audience likely hasn’t a clue who she is). There are a few moments of comic genius – Russell’s Commander Stronghold mulling over the idea of dropping Will in a vat of toxic waste to kickstart his latent powers is one of ’em – but for the most part Sky High plays like a particularly well-budgeted parody of the old ABC Afterschool Specials, with superpowers filling in for puberty and cliquish teen rivalries giving way to happy endings all around. It’s inoffensive and sports a positive "be yourself" message that’s obvious enough to be seen from space without benefit of hero-vision, but really, there’s very little that’s super about it. 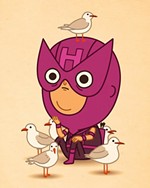