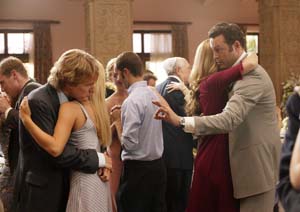 Much has been made of Wedding Crashers’ bid to reinvigorate the R-rated comedy, a genre that’s lain mostly dormant since There’s Something About Mary. Wedding Crashers will no doubt make buckets of money, but it’ll do so without half the wit, compassion, or inspired madness of Mary. Wilson and Vaughn play John Beckwith and Jeremy Klein, lifelong friends and partners in a D.C.-based divorce mediation firm. Given their profession, it’s no shock that they’re both a little leery of love. They choose instead to live in perpetual playboyland, and the wedding season is like Christmas in July for them. But all their rules are broken (and yes, they have a set of rules, some of them very funny) when they crash a high-profile politico wedding. John falls for the maid of honor, Claire Cleary (McAdams), while Jeremy falls into a Fatal Attraction-like dalliance with Claire’s nutjob sister, Gloria (Fisher). The plot does backflips to get the two men stranded on the Cleary family’s Kennedy-esque island compound – just one in a string of needling logistical leaps. Kookiness ensues, but it’s mostly cookie-cutter stuff – Bob Fisher and Steve Faber’s script boasts old chestnuts like diarrhea, a salty gramma, and a hunting trip gone awry. Vaughn, in a role just once-removed from his breakout performance in Swingers, most consistently brings the laughs with his frequent motor-mouth monologues that are a riot of sex jokes and non sequiturs (watch where he goes with maple syrup). But Wilson, playing straight man, is a dud, badly straddling the twin demands of his part: sleaze and sincerity. Sleaze mostly wins out. As for sincerity, it’s hard to take seriously an actor whose eyes are but half-slits most of the movie. Keep an eye on the eyes of all the men here – they’re a bloodshot bunch. It’s hard to blame them, really – a stiff drink or maybe some pharmaceutical assistance might have made me overlook the film’s sour tone, or the unremarkableness of its direction (helmer Dobkin shows none of the nuance of his underrated debut, Clay Pigeons), or its bewildering characterizations of sexuality and race (gays and blacks are represented, respectively, by a squirrelly psychotic and a Jamaican house servant). I predict a long and fruitful future for Wedding Crashers – buckets of money – but by my count, it doesn’t just crash, it burns. 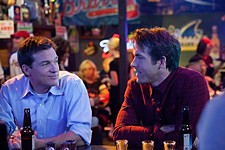