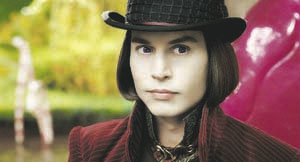 When Charlie Bucket (Highmore) wins one of five golden tickets and thereby an invitation to visit the chocolate factory of reclusive candy-man Willy Wonka (Depp), he takes along Grandpa Joe (Kelly) and embarks on a delightfully perverse jaunt through not only the factory but also the bizarre mind of Wonka himself. This is news to no one, as are the other four invitees: porcine Augustus Gloop (Wiegratz), tiny seether Veruca Salt (Winter), over-competitive Violet Beauregarde (Robb), and video-game addict Mike Teavee (Fry) – all of whom arrive with parentage in tow. I sat through Tim Burton’s generally splendid, artful, and often sinister screen version of Roald Dahl’s classic children’s book with an enormous grin on my face for much of the time. Nevertheless, I was burdened with the nagging feeling a visit to my dentist was long overdue, and also, more alarmingly, that Johnny Depp was simultaneously channeling Kids in the Hall-era Dave Foley, latter-day Michael Jackson, and perpetual KROQ DJ Rodney Bingenheimer to create his own surreal vision of Dahl’s lunatic confectioner. As Burton’s surest cinematic confederate, Depp is unimpeachable, the actorly yin to Burton’s directorial yang, and here he submerges himself in the role as at least as deeply as he did for his most genuine and affecting turn in a Burton film, that of Ed Wood. And yet, his version of Wonka, who appears to dislike children as much as he loves chocolate – a nod to Dahl’s deliciously creepy book – hasn’t to my mind displaced Gene Wilder’s antic portrayal from the 1971 version. To be sure, this Wonka is truer to the source material. Screenwriter John August, although he snatches a handful of third-act liberties, bathes the plot in a welter of verbal and physical gags that serve to machinate the kid-friendly unease into sticky new realms of chewy, gooey alarm. But Depp’s Wonka, despite the revelations of a traumatic youth spent behind an orthodontic wire-frame muzzle that’d give Hannibal Lecter the screaming meemies – or perhaps because of them – seems less mysterious than he ought to be. Not completely knowing if Wonka is friend or foe was (and remains, in Dahl’s book) one of the more adult themes to remain part of the candymaker’s mythology, so much so that even shock-maven Marilyn Manson incorporated it into his first album. Compared with the rest of the film, which dazzles outright with its gob-stopping production design from Alex McDowell and Deep Roy’s unsmiling Oompa Loompas, Depp seems oddly unmoored, even ephemeral; cotton candy to Wilder’s crunchy dark chocolate. Depp’s performance aside, Charlie and the Chocolate Factory is pure magic, swimming as it is in a black-treacle riptide of astonishing Oompa Loompa production numbers, an eerie patina of CGI airbrushing (Wonka himself looks downright pasteurized), and some almost too clever in-jokes, and at least two references to Kurt Neumann’s 1958 film The Fly. Unlike the 1971 version, Burton and longtime scorer Danny Elfman use Dahl’s own lyrics for the Oompa Loompa showstoppers, which means the songs are thankfully briefer and less annoying. Other wonders include the great Christopher Lee, who appears as Wonka Sr., the screen’s second most distressing dentist (after Laurence Olivier’s Christian Szell in Marathon Man), and Phillipe Rousselot’s pristine cinematography, which wraps the whole production up in a manic, stylized glow. Devoured together it’s enough to give you a joyous stomachache – or possibly a brain-freeze – of epic proportions.