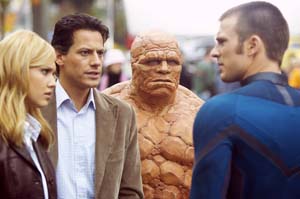 It must be a relief to The Fantastic Four co-creator Stan Lee (with the late, great Jack Kirby) that he’s finally hit cinematic pay dirt over the past half-decade. Long in the tooth but still as giddy and seemingly awestruck by the thrill of it all at 83-years-young, Lee has seen a flurry of Marvel Comics-owned properties (perhaps most importantly his beloved Peter Parker, aka the spectacular Spider-Man) prove the naysayers wrong: The comic book medium can translate to the screen with its integrity intact. Thanks in no small part to fantasy filmmaking’s ever-more-integral CGI effects having finally matched pace with Lee’s fertile, febrile, early-Sixties, four-color, pulp-paper imagination, Lee can saunter off to that great bullpen in the sky knowing Hollywood finally got it right. Just not this time. Oddly directed by Tim Story (last seen helming the disastrous Jimmy Fallon travesty Taxi), this is the origin story of brainiac sci-fi guy Reed Richards (Gruffudd), his capable lady love Sue Storm (Alba), her cocksure, testosterone-bomb of a kid brother Johnny Storm (Evans), and friend-to-the-end Ben Grimm (Chiklis), and what happens to them after they’re saturated by radiation from a cosmic storm while orbiting the Earth in the name of Saving Mankind. Along with creepy billionaire and early rival for Sue Storm’s affections Victor Von Doom (McMahon) the four return to terra firma with – gulp! – fantastic new abilities. Richards is now the Richard Feynman version of Elasticman, Sue can turn invisible and create force fields at will, hothead Johnny is as combustible as ever, but he can now fly, too. It sounded like a swell deal to me at the age of 10, for everyone but poor Ben Grimm, who turns into a lumbering, orange boulder, know known as the Thing. Speaking of which, one of the best things about Lee and Kirby’s original comics were the Ben Grimm character – tortured that he’d lost the ability to be regarded as anything but a freak by the public-at-large (shades of X-Men’s eternal plight) and always dreading that his blind sweetheart Alicia Masters (Washington) might someday trade him in for a newer, less metamorphic schisthead. Here, Chiklis, the psychotic cop of The Shield, nails the character’s raging self-pity despite the dodgy foam rubber suit he’s stuck wearing. When Von Doom, in a major plotting change from the source material, slowly transforms into the steely-visaged and gray-cloaked supervillain Dr. Doom, only Chiklis’ Thing seems up to the task of clobberin’ not only the bad guy but the half-hearted dialogue as well. Michael France and Mark Frost’s script is chock full o’ nuts and bolts but lacks any real core of emotion, and even a 10-year-old could tell you that’s what made Stan Lee’s characters so instantly identifiable, not to mention culturally durable. The vapid romance between Reed Richards and Sue Storm plays like bad daytime television, while McMahon’s rendering of Von Doom comes off like Donald Trump channeling Josef Goebbels – it ain’t a pretty sight. Only Chiklis’ Thing and, to a lesser degree, Chris Evans’ Human Torch (who pretty much acts like you’d expect a male teenager with the power to melt both evildoers' minds and young girls' hearts) generate any emotion. Weighted down with a turgid story and utterly middling special effects, The Fantastic Four isn’t likely to be Stan Lee’s favorite of the nearly dozen Marvel Comics adaptations either out already or on their way (hello, Luke Cage). Look at it this way, Stan: After this mediocrity, no one’s even going to remember Roger Corman’s godawful bargain-basement 1994 version. Which, on second thought, had a lot more heart than this one.