Paheli may strike Bollywood enthusiasts as an unnatural alliance between two antipodal forces – the Hindi megastar Shahrukh Khan and the arthouse director Amol Palekar. Indeed, it’s caused enough of a fuss that Palekar has issued a director’s statement on the film’s official Web site, arguing that "content and substance need not be sacrificed in order to make a commercially viable cinema." (Apparently someone forgot to cc Hollywood the memo.) But that debate – parallel versus mainstream cinema, realism versus song-and-dance splash – most likely will sail over the heads of casual viewers. Paheli (which translates as The Mystery) tips more toward commercialism, minus the cheese so common to Bollywood pictures, and amounts to a mostly pleasurable experience with occasional bursts of brilliance. The story is taken from a Seventies novel by Vijayadan Detha, who in turn was adapting an old Rajasthani folktale, and Paheli wisely adheres to the tenets of the traditional folk narrative: This is, after all, an allegorical ghost story, which typically plays better once upon a time, in a faraway land. At film’s beginning, a young woman named Lachchi (the gorgeous, champagne-eyed Mukherjee) is preparing to journey to her soon-to-be husband’s palace; the rousing first musical number, "Minnat Kare," involves her handmaidens’ breaking down of the wedding night wifely duties to her (although my notes do in fact read, "wait – is this song actually about getting laid?" the effect is far more sensitive, even subversive, than that note suggests). On the way to the palace, Lachchi spends some not-exactly-quality time with the new husband (Khan), who turns out to be a real stiff. The bad omens continue – at least, seemingly – when they pit stop in an abandoned village, the home of "128 ghosts." One of those ghosts, cheekily manifested in the form of a squirrel and an incontinent crow, becomes smitten with Lachchi, unbeknownst to her. (I might be mistaken, but I think this is the first filmic meet-cute that hinges on bird shit.) When they get to the palace, Lachchi’s new husband shuts down her every overture, and in the morning he debarks for a five-year-long position in the city. Cue the ghost (also played by Khan), who takes on the same shape as Lachchi’s husband and returns to the palace to her welcoming arms, while the real husband toils away in the city. Sure, it’s a far-fetched premise – and Paheli is least effective when it milks the silliness of the scenario for laughs – but there’s a real tenderness at its core. The ghost is honorable, devoted, and deeply romantic, and there’s something sincerely moving in the idea that this ghost loves with a depth and purity that his human rival could never fathom. Khan and Mukherjee (also a huge star in Indian cinema) are stunningly good-looking people with something of a forcefield surrounding them: When Paheli lags from lack of plot or when another lame joke – like Borscht Belt repurposed for Bollywood – fails to land, still the stars remain undented. There’s more to recommend: M.M. Kreem’s fine music (melding traditional Rajasthani instrumentation and a dancehall beat), a gone-cuckoo-for-the-color-wheel costume and set design, and a truly bang-up camel race. Now that’s entertainment. 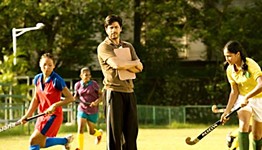 Chak De India
Bollywood film about a male coach who teaches the ragtag women's national hockey team to believe in themselves.