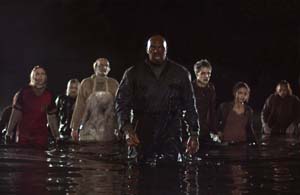 George A. Romero's Land of the Dead

The first thing you see after the opening credits is a dingy, rusted restaurant sign advertising – what else? – "Eats." The shot, artfully accomplished via a slowly swooping crane, is a note-perfect moment: part wry graveyard chuckle to be sure, but with more than a touch of grim melancholy to it. The iconography of Romero’s worldview-cum-horror show has come a long way in the 37 years since he first shattered just about every cinematic taboo with the original Night of the Living Dead, and then topped himself twice again with 1978’s Dawn of the Dead, a sly, humorous ode to the birth of American mall culture and the death of individuality, and 1985’s Day of the Dead, a bleak, surreal portrait of desperate civilians versus unhinged soldiers, all but imprisoned in a dank, subterranean army depot that might as well have been yet another circle of Dante’s Inferno. And throughout it all those creepy dead folk, up and at ’em with no explanation (thankfully) and just dying for some good eats. So now Romero’s hapless, sometimes hopeless characters are well and truly in the Land of the Dead. Worse than that, Dennis Hopper’s running the show. As the affluent, ruthless Kaufman, Hopper carries the well-pressed stink of Enron-ian faux-entitlement about him, controlling a massive, shining skyscraper nicknamed Fiddler’s Green for the benefit of the upper classes. Rising from the center of an otherwise dead city like some obscenely festive memory of the corrupt society that birthed it, the Green is heavily fortified and guarded by Kaufman’s private shocktroops. Inside, those with the financial means and the right, white skin tones wine and dine as though the world hadn’t ended after all. Elsewhere, on the streets, in the ghetto areas that surround the Green, however, revolution of a sort is brewing, galvanized by the archetypal antihero Riley (Baker) and his new pal Slack (Argento, daughter of Italian horror maestro Dario), a former hooker with a yen for revenge. Add John Leguizamo’s opportunistic but naive Cholo, a runner for Kaufman who hasn’t yet figured out this whole class thing, and Romero has again crafted a character-driven horror film that doubles as a metaphor for both the current economic disparity in America and, to a lesser degree, the war on terror. Speaking of terror, the local flesh-eaters, led by a hulking former gas-station attendant who’s by far the smartest zombie on the block, have begun to relearn how to use basic tools skills, augmenting their already formidable dentistry. Romero’s populist horror story is, of course, slathered to the jugular with some seriously MPAA-challenging gore effects, courtesy of KNB EFX Group (late of Sin City). It wouldn’t be a Romero film without at least a few dozen exploding heads, piles of steaming viscera, and botched rescue attempts that end with the lurching corpses gnawing on fresh-killed human take-away. Gore fans can rest easy: The film’s contractually obligated R-rating is borderline NC-17, and the red stuff spurts in abundance. Even Romero’s best films have previously suffered from budgetary constraints and sporadic bouts of semiwooden acting that left nonfans wondering what all the fuss was about. Land of the Dead suffers much less in that department thanks its substantial budget, Leguizamo’s edgy theatrics, and a gently touching turn by Robert Joy as Riley’s scarred shadow, Charlie. Hopper, unsurprisingly, devours scenery like he’s already dead and loving it, but for once his penchant for overacting is overshadowed by the real stars of Romero’s world: They’re dead, they’re all messed up, but it’s great to finally have them back in town. 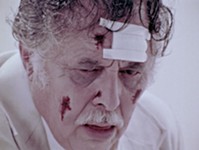 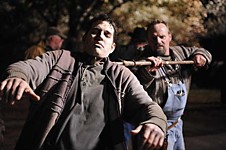