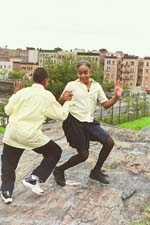 In the New York City public school system, fifth-graders are required to take a 10-week course in ballroom dancing that concludes with a citywide competition. While learning to foxtrot, tango, and rumba, the kids also get some rudimentary experiences in facing the opposite sex and developing social skills and physical graces. Filmmaker Agrelo and writer Amy Sewell observe the process and present their discoveries in this documentary, Mad Hot Ballroom. Unfortunately, there is more observation than discovery in their movie. The kids are delightful, although the students are most revealing when interviewed outside the classroom. They are 10- and 11-year-olds, most of whom are uncomfortable with or uninterested in the opposite sex and are physically awkward with their suddenly developing bodies. Three diverse NYC classes were selected by the filmmakers to track: one class in trendy downtown and culturally hip Tribeca; one uptown with a largely Dominican student body in Washington Heights; and one in Bensonhurst, Brooklyn, with a student population that is half Asian. However, the material presented by Agrelo and Sewell is such a jumble that by the time we listen to the kids’ comments outside the classroom it becomes impossible to differentiate among them and remember who belongs to which classroom and their level of ability and poise on the dance floor. The hours of instruction all jumble together in an endless conga line of repetitive scenes and mounting anticipation of the looming competition – and although the kids are cute, it’s true that a little can go a long way. What the filmmakers put onscreen is mostly superficial stuff: the cuteness, the tension of competition, the self-confidence that grows in relation to the learning and command of new skills. As is, this is Arthur Murray for tots. Topics that might have helped the film could be anything from a focus on how the cultural backgrounds of the kids affect their success in the program or how the program reinforces the sexual stereotypes of proper behavior for little ladies and gentlemen. And gaydar topic alert: Does anyone notice that some of the instructors are gay? Of even greater interest would be some investigation into how the ballroom dancing program compares with other cultural enrichment programs in the city. Does one have better numbers than another in terms of keeping kids out of gangs and trouble? Is ballroom dancing a better socializer than orchestra or co-ed karate lessons? Is the nerve-racking attention given to the competition healthy for these young egos? Maybe the film and its viewers would be better served by an argument for the value of cultural enrichment and after-school programs in general, rather than ballroom dancing specifically. In contrast to its great title, Mad Hot Ballroom is anything but: Let’s just say I was not spellbound. 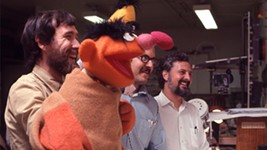 Street Gang: How We Got to Sesame Street
How one TV neighborhood became our shared classroom