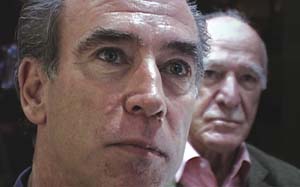 If your discriminating wine palate starts and ends with whatever’s in the two-for-$8 bin at Fresh Plus (don’t snicker, it’s a steal), then this sprawling documentary about the globalization of the wine industry probably won’t be your cup of … well, you know. Filmmaker and sommelier Jonathan Nossiter’s ambitious but frequently directionless film is for specialists only; no concessions, no wine primer, and scant historical context are provided for the casual drinker. Nossiter hits the ground running – with a spastic camera to prove it – and rarely slows down in this documentation of a David-and-Goliath story: the centuries-old tradition of terroir and individually produced and owned wineries (represented mainly by the French old guard) vs. the American megacompanies that threaten to impose their tastes and techniques on the global market. Although Nossiter mostly stays out of the frame and eschews editorializing, it’s obvious he’s fingered three villains here. The first is the Mondavi family, whose Napa Valley-based business has expanded to holdings on three continents. The second is Michel Rolland, a "flying wine maker" and consultant to more than 100 wineries. A sort of grinning, Gallic Big Bad Wolf, Rolland likes to breeze in and bark out orders to micro-oxygenate a barrel; detractors accuse him (rightly, it seems) of homogenizing wine. And finally, there is the American Robert Parker, a sort of supercritic who has the ability to make or break a wine based on his rating. With something of a patriotic blush, Parker likes to say that he has issued forth a new way of wine tasting – a "candid, democratic" way; his critics like to say that his undue influence has forced an Americanization of what is essentially a European tradition. Even without a previous understanding of the wine wars, this is inherently fascinating stuff – especially when interviewees growl about conspiracy theories and lob loaded words like "resistance" and "collaboration." But the drama is frequently lost in the film’s onslaught of interviews and information (especially frustrating are the IDs that flash too quickly on and offscreen at the same time subtitles are racing by). Nossiter, who also has made several feature-length narrative films, fails to bring over the most basic ideas of storytelling – of setting a scene and introducing key conflicts and characters (Parker, perhaps the chief "villain," doesn’t even appear until halfway through the film). Nossiter is reportedly expanding the film into a 10-part series, and I suspect Mondovino will only benefit from that expansion. As is, it’s simply too much information crammed too haphazardly into a running time that at times borders on interminable. And a final forewarning: A glass of "just-getting-in-the-mood" wine during viewing does not sit at all well with the herky-jerky camerawork.