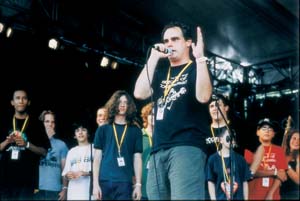 Maybe this documentary plays better in places outside Austin, the so-called live music capital of the world, where the notion of a rock school for kids might be more of a eureka idea rather than an already existing reality that’s happening in garages, summer camps, and afterschool programs throughout the city. That said, if one were looking to open a rock school of one’s own, there would be very little practical or instructive information in this film to guide one’s efforts. For this is not just any rock school that director and cameraman Argott captures: This is the Paul Green School of Rock in Philadelphia, and it’s Paul Green more than his school of rock that becomes the real subject of this documentary. This may not jibe with Argott’s intentions for his film; nevertheless this is the end result: a portrait of an aging, former wannabe rock star whose ego and standard of success is now all tied up in the performance of these kids. Green is definitely a character, given to grandiose outbursts and hectoring tirades. He badgers, insults, and belittles the youngsters into taking the music and themselves seriously and practicing their instruments as though they were at Juilliard. Pedagogically speaking, he regards his methods as motivational, though his self-taught approach will probably give shudders to those inclined toward more conventional educational practices. Green loves rock, and he wants the kids to as well. Yet we never see the nitty-gritty of Green teaching the students chords and music theory, fingering and technique. Nor do we ever witness Green playing an instrument, leaving unquestioned the subject’s own contention of his great musical abilities. All that aside, the film does include bits of interviews with some of the students and their parents. All seem happy with rock school, except for one boy who has dropped out. But even then, the boy is not unhappy about the experience and has definitely grown as an individual since the beginning of the movie. The narrative thrust of the documentary is the annual Zappanale festival in Germany, to which the kids have been invited to play. To his credit, Green has his students agilely performing complicated Zappa tunes (in Germany they receive kudos from Zappa band regulars Napoleon Murphy Brock and Jimmy Carl Black). Still, one has to question the motivations for Green having his students perform the work of his favorite composer, and not something more suited to pre-adolescent tastes. Paul Green seems more interested in what rock school can do for him than for the kids. Last Days Here
The three-decade descent into full-time drug-taking by Bobby Liebling, the theatrical lead singer of the hard-rock group Pentagram, is revealed in this moving documentary.