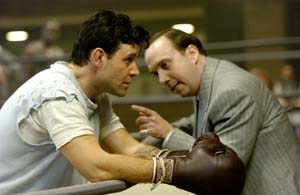 Ron Howard and Russell Crowe have once again combined their efforts to create a big Hollywood biopic that exudes the strong whiff of Oscar bait. Like 2001’s A Beautiful Mind, Cinderella Man selects an almost too-good-to-be-true public figure and, with an assist from screenwriter Akiva Goldsman, turns the story into one of individual triumph over great adversity. In A Beautiful Mind, the title subject’s struggle was with the personal demon of mental illness; in Cinderella Man the boogeyman is the Great Depression – a public scourge that hobbled a country, but again it’s the individual who overcomes the adversity, not the nation. Still, using the fairy-tale nickname of the boxing contender Jim Braddock (Crowe) as the title of their movie, the filmmakers show that they wish to perpetuate this "great man" approach to history in which the exceptional individual triumphs over the odds and therefore keeps hope alive for the rest of us slobs. Cinderella Man is the grandest "feel good" movie to come along in a while, one that uses the Depression as atmospheric background and a love story for narrative heft to create an overlong saga that wishes to inspire, uplift, and engage the masses. Cinderella Man follows the basic formula and clichés of the boxing picture: A rookie with talent and moxie shows great early promise but is sidelined by an injury and then gets a long-shot chance to recapture his title and glory. Where Howard’s film differs from most boxing movies is that Braddock doesn’t chase women and booze: He’s not a victim of his own bad habits and choices, he’s only a victim of bad luck (he breaks his hand), the capricious Boxing Commission that revokes his license, and – like everyone else – the Depression. We see Braddock and his devoted wife, Mae (Zellweger in a thankless, underwritten role), go from middle-class comfort at the beginning of the film to a spartan, unheated basement apartment where the health of their three kids is always at risk from starvation and hypothermia. As much as the film tries to portray Braddock as a regular guy, the "Bulldog of Bergen, the Pride of New Jersey" is really an exemplary figure: He brings his payouts straight home to his wife, he resists taking welfare or asking for handouts (and when he finally breaks down and does, it becomes the film’s most emotional scene), he’s a loving and involved father and kind to his friends, and an onscreen epilogue enumerates all the wonderful things Braddock accomplished in his post-boxing career. He’s a saint in the flesh, but not one who inspires great drama. Howard and cinematographer Salvatore Totino get great material in the ring during the action sequences, but Jim and Mae are sluggish characters to watch for any length. We’ve seen both these actors do similar work before, albeit not with their Hackensack by way of Perth and Waco accents. More attention is likely to be showered on supporting actors Bierko (as the sneering, imperious Max Baer, who had killed two men in the ring) and Giamatti (as the boxing promoter Joe Gould), who has also done much better work before but may earn the sympathy vote after his Academy dis for Sideways. Like the soft-focused sepia tones that characterize all the film’s backgrounds, Cinderella Man reflects us back to ourselves through the gauzy blur of a manmade scrim.