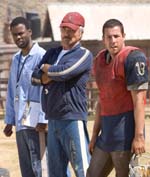 1974 was a good year for Burt Reynolds. Coming off the success of Deliverance two years earlier and the more recent popular appeal of White Lightning (which recast him with Ned Beatty), Reynolds had plenty of years before Loni, Dom, and Stroker Ace would manhandle his career into self-parody. One of two Reynolds teamings with director Robert Aldrich, The Longest Yard reworked Aldrich’s own The Dirty Dozen for the gridiron to spectacular, epithet-laden success. While this new remake is considerably toned down in terms of both the original’s freewheeling (and hilarious) vulgarities and grim prison violence, director Segal and star Sandler acquit themselves with, if not exactly honor, then at the very least a full understanding of what made the rough-and-tumble original film so appealing. Sandler takes over for Reynolds as former pro footballer Paul Crewe, disgraced in a point-shaving debacle and current resident of a Texas penitentiary after drunkenly stealing his girlfriend’s Bentley (not nearly as macho-resonant as the Maserati Reynolds nicked in Aldrich’s film) while on a late-night bender. Once incarcerated, Crewe is forced by sadistic, football-mad warden Hazen (Cromwell) to recruit the worst of the worst for an upcoming Guards versus Cons football match. With help from Caretaker (Rock) and former pro Nate Scarborough (Reynolds), Crewe and his band of muscled misfits manage to finesse a real team into existence via nonstop practice and the occasional inspirational speech. Director Segal clearly knows Sandler’s strengths (he should – they’ve teamed together before on Anger Management and 50 First Dates) and consistently plays to them. That’s especially noticeable during the film’s opening scenes, during which Crewe cracks wise to his girlfriend (Cox), a pair of cops, and finally Warden Hazen and his alpha bull, Captain Knauer (the underused Fichtner). Once the ramp-up to game day begins, however, the film asks you to buy the scrawny, overtly menschy Sandler as a former NFL champ. That’s admittedly a bit of a stretch, but to his credit, the actor manages even that, and The Longest Yard rarely succumbs to the full-on pigskin comedics of, say, The Waterboy. What makes this version of the film ingratiating is similar to what made Aldrich’s such a success in the first place: the script – this time credited to Sheldon Turner, working from Tracy Keenan Wynn’s original. Segal stays remarkably faithful to Wynn’s template, including whole scenes and even snatches of nonblue dialogue, which quickly defuses the sense that you’re watching not a remake but a rip-off. Added to that is an appropriately bulky supporting cast, including a clutch of familiar faces in the form of both guards (Brian Bosworth, Steve Austin, Kevin Nash) and prisoners (Bill Goldberg, Michael Irvin). Leachman replaces Bernadette Peters as the warden’s lascivious secretary, while rap import Nelly coasts through on his good looks and hip-hop charm. Over the years, Aldrich’s original has gained a certain cachet of prestige that it didn’t have upon its release; never a film classic in the true sense, it was instead a rowdy crowd-pleaser that merited a lengthy parody in the pages of Mad magazine. Segal’s version is no sports-film watershed, either, but it is consistently entertaining, athletically brutal, and, more often than not, well-acted. Which is more than can be said for The Replacements and other semirecent footballer films.