There’s a wonderful running gag in the BritCom Spaced, which, should you be so unlucky to have not yet caught an episode, features tow-headed Simon Pegg (of Shaun of the Dead) as Tim Bisley, a down-on-his-luck twentysomething film and comic-book geek whose life is continually overshadowed by the supposed betrayal wrought upon it by George Lucas’ disastrous handling of The Phantom Menace. Pegg’s is a remarkably accurate fanboy archetype – he represents those hordes of place-sitters decamped outside the local cineplex, broiling like bantha kebabs beneath the Tatooine sun as they patiently wait for yet another convoluted space epic from the man who, a long time ago, in a place far, far away from the Star Wars universe, brought us the vastly more entertaining American Graffiti. Personally, I’ve never been one of those rabid queue-monkeys. On the other hand, I vividly recall the day my father took me to see Star Wars in 1977. That opening shot of John Dykstra’s immensely conceptualized Imperial Star Destroyer, seen rolling into frame from below like some gargantuan, unfathomable sea creature gives me goose pimples to this day. It’s no secret that (genius pacing aside) Star Wars is essentially a hack Republic serial knockoff, but true to the mettle of what it means to be a certifiable classic, the original film holds up amazingly well to this day, as does Irvin Kershner’s superior 1980 sequel, The Empire Strikes Back. Not so the Ewok-bedeviled Return of the Jedi, which exudes a flyblown stench so disconcerting you could drench it in quicklime, freeze it in carbonite, and submerse it beneath the swampy muck of Dagobah and still it would make Obi-Wan furrow his brow in dismay. Luke: "What’s wrong Obi-Wan? Do you feel a great disturbance in the Force, as if millions of voices suddenly cried out in terror and were suddenly silenced?" Obi-Wan: "Nah, kid, it’s those damn Ewoks. Jesus. What was Lucas thinking?" Which brings us to Revenge of the Sith, episode three in this increasingly overcrowded sextet. Is it worth the wait – and, more to the point, does it make up for the past two middling gabfests? Yes and no. From frame one, Sith has a palpable sense of ravening urgency, of cataclysmic events coming to a dark and deadly head. Lucas has wisely foregone the rafts of expository chatterboxing that marred the two previous episodes. That leaves room for both the characters and the audience to wallow in the series’ greatest strengths: tightly choreographed light-saber battles (lots of ’em); an opening dogfight sequence that rivals the rebels’ exhilarating, stand-up-and-cheer final run on the Death Star in the original Star Wars; and the ultimate battle between noble Jedi Obi-Wan Kenobi (McGregor) and the tragically flawed Anakin Skywalker (Christensen), who, despite our foreknowledge of his pleather-entombed destiny as James Earl Jones, surprises nonetheless with a horrific sequence of body modification gone Cronenbergian. (And best of all, for certain fans, Christopher Lee is on hand as the nefarious Count Dooku.) So, yes, Revenge of the Sith is a far stronger and more entertaining film than all but A New Hope and Empire Strikes Back, narratively speaking. As for the acting and the dialogue, well, Lucas still can’t write his way out of a wet paper bag with a light saber and a planetary ion cannon. This failure is most clearly evidenced by a painfully melodramatic third-act sequence involving the freshly vacuum-packed Darth Vader, who, in an allegedly heartbreaking moment of existential crisis, raises his arms heavenward and lets loose with one of the most comically clichéd bellows of grief this side of Homer Simpson. Much of the storyline, also, is predicated on the fact that every major character appears to be a rank amateur when it comes to presupposing their opponents’ tactical and political maneuvering. This goes double for the Jedi Council, who might as well be from Fraggle Rock for all the strategic cunning they display in the face of the far more guileful Empire. In the end, Sith is saved from mediocrity not so much by the film itself but by its fans, who will most likely come away with a pleasant case of the retro-futurist tinglies. "Look! There’s Luke and Leia being born!" "And there’s the half-constructed Death Star!" "And, whoa, wasn’t that the Millennium Falcon in the corner of the frame there?" (It was.) "And, hey, isn’t that Peter Cushing’s Grand Moff Tarkin in the final battle?" (Possibly. Hard to tell since he’s dead.) Veering from moments of breathtakingly visualized valor to outright stupidity, Sith is a vast improvement over the previous two outings, but still and all, it’s no Star Wars.

Star Wars: Episode One – The Phantom Menace
It's time to find out if a 3-D lightsaber is any more effective than 1999's 2-D model. 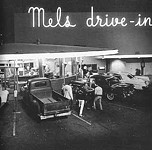 American Graffiti
Once upon a time in what seems like a galaxy far, far away, George Lucas knew how to tell stories about real people in real ...