Did anybody bother to tell Richard Linklater that his upcoming Bad News Bears remake has been beaten to the cineplex by this third-rate knockoff? Does anyone care? Likely as not, since this genuinely strange film hybridizes Michael Ritchie’s original 1976 underdog comedy, The Great Santini, and a passion for coffee that skews just this side of junkie – which makes it one of the oddest kids films since The 5,000 Fingers of Dr. T. Ferrell plays Phil Weston, a milquetoast suburban dad who lives in the shadow of his sports-mad dad (Duvall) until he finds himself coaching his own son’s soccer team, the Tigers. The catch, of course, is that the winningest team in town is coached by none other than Phil’s macho pop, Buck, which sets the stage for some father-son relationship comedy that, in the end, isn’t nearly as interesting as Kicking & Screaming’s java fetishism. Seriously. Phil drives a Prius and owns a vitamin store (Buck, on the other hand, runs a wildly successful sporting goods chain) but has never, according to the story, sampled coffee in his life. Not until he hires his dad’s next-door neighbor, Mike Ditka (yes, that Mike Ditka), as assistant coach, does he take his first sip of victory and ends up drawing as close to meth addiction as a PG film can go. It’s a supremely bizarre, almost Dada-esque subplot, but to writers Leo Benvenuti and Steve Rudnick’s credit, it’s responsible for nearly all of the film’s comic highlights, including one snappy gag that has a wired-to-the-gills Phil suggesting that his team devour their pint-sized Asian teammate for extra energy. I kept waiting for the inevitable Duvall-as-Lt. Col. Kilgore "smells like victory" speech, but it never arrived, instead supplanted by some touchy-feely folderol about how winning isn’t everything and coffee is the blood of the gods or something along those lines. Continuing with the Bad News Bears tack, Dylan tosses in a pair of adolescent Italian soccer prodigies: They’re no Tatum O’Neal, to be sure, but the preteen Pele knockoff’s are at least an improvement over watching the rest of the Tigers muff shots that even a blind goalie with his limbs removed couldn’t miss. Ferrell is mucking about in his trademark clueless schmo routine, Duvall is the tough-as-nails old codger, and Ditka is Ditka, which makes Kicking & Screaming roughly as entertaining as watching your neighbor’s kid’s soccer game, not because you want to, but because you have to. Feh. 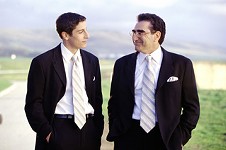 American Wedding
Jesse Dylan’s first feature was the ganja-infused comedy How High, which, while not exactly a high-bongwater mark in the annals of stoner merriment, managed to ... 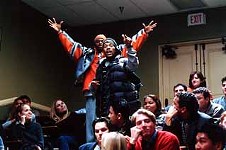 How High
Pot comedy. Let's concede at the outset that artistic immortality is not what this subgenre of filmmaking is after. Pot comedies aim for more fleeting ...