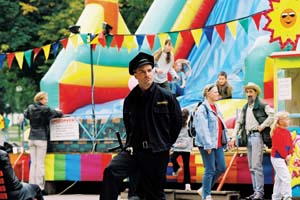 The velvet revolution has given way to a decidedly unvelvetine underground in Czech director Jan Hrebejk’s (Divided We Fall) Oscar-nominated black comedy, which comments not only on the current post-Soviet state of affairs in Prague but also on the No. 1 topic of conversation in the EU these days: immigration and the diaspora of newcomers flooding into the various metropoli of the old Europe. Hrebejk weaves a series of parallel tales into a cohesive fabric that teeters between resigned, fatalistic hilarity and outright pathos. To begin with, there’s the pair of immigrant smugglers who unintentionally end up in possession of a misplaced Gypsy infant. Through a circuitous route, the child ends up in the care of the barren Mila (Burger) and her husband Franta (Machácek), a reformed soccer hooligan angling for a second chance at a respectable life. In Hrebejk’s Czech Republic, that’s not so easy, as Franta’s past dogs his current incarnation every step of the way, barring him from serious employment and relegating this willful outsider to an even worse fate: working security at an amusement park (where the child-mad Mila halfheartedly tries to kidnap other mothers’ unattended offspring). Then there’s Hana (Timková), a social worker helping the baby’s true parents track down their missing tot. She’s also the (far younger) mistress of elderly university professor Oto (Triska), who suffers a seizure while teaching a class on the politics of immigration and is diagnosed with a brain tumor. His seemingly last wish is to divorce his wife of 20 years, Vera (Vášáryová), thus allowing him to marry Hana. This is complicated by the fact that he has an estranged son, Martin (played by director Milos Forman’s son Petr), who lives the surfing life in Brisbane, Australia. When Martin returns home in the wake of his father’s collapse, he discovers Hana and Oto are parents to a teenage daughter, Lenka (Boková). But is she really Martin’s sister? Or is she his daughter from his previous relationship with Hana? Peyton Place has nothing on this gang, but Hrebejk’s stylish direction and perfectly chosen cast make what might otherwise have been a depressing tale of post-perestroika working class woes into a melancholy, comedic riff on what it means to be European these days. Shot in a brash palette of flickering fluorescent blues and sickly ochres by cinematographer Jan Malir, Up and Down has the look and feel of Euro-Altman (vastly superior to Euro-Disney, mind you), and while the crowded storylines never fully interconnect, the complex emotional scaffolding of the racist skinhead soccer buff and his newfound tenderness in the face of parenthood is as sweet a metaphor for the redemptive power of societal upheaval as you’re likely to find. 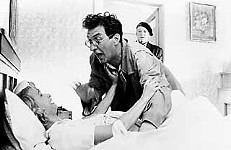 Divided We Fall
It's commonplace enough for well-intentioned filmmakers to tell stories of simple heroism during the Holocaust -- stories about flawed people attempting in some small way ... 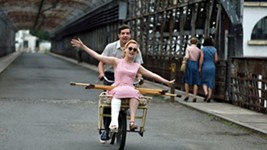