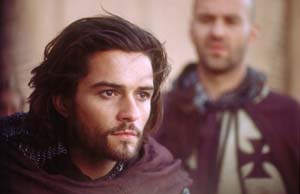 At the end of the 12th century, in the middle of the Crusades, a fragile peace prevailed between the warring Christians and Muslims in Jerusalem. It is this unusual period of time that director Scott and first-time screenwriter William Monahan use to their advantage in Kingdom of Heaven, a far-reaching period epic that is also relevant to our understanding of the conflicts in the Middle East of the present day. Scott is a masterful creator of otherworldly and noncontemporaneous locales, as films such as Gladiator, Blade Runner, and The Duellists will attest. His attention to detail is equally meticulous here, and Kingdom of Heaven additionally benefits from the exacting participation of cinematographer John Mathieson and production designer Arthur Max. By placing the story in this relatively peaceful time period between the Second and Third Crusades, the filmmakers have managed to fend off likely criticism by having no single religious group appear as the sole aggressor. If anything, the Christians seem the more battle-hungry participants, as they seek to oust the Muslims from Jerusalem, while the legendary Muslim leader Saladin (Syrian film star Massoud) shows marked military restraint. Despite the restive calm governing the region’s religious warriors, Kingdom of Heaven has a good number of battle scenes that are vividly punctuated with the sights and sounds of bloodied knights and soldiers and clanging swords and chain mail. Kingdom of Heaven is a historical spectacle on the order of Gladiator and a dissection of war as gritty and illuminating as Black Hawk Down, to name two of Scott’s most recent films. Balian (Bloom), a French blacksmith, is the character at the center of this movie. He despairs knowledge of God’s love at the start of the film because of his wife’s suicide following the death of their infant son. His destiny changes when Godfrey of Ibelin (Neeson), a great knight who has returned home from the Holy Land on a recruiting mission, reveals himself to be Balian’s illegitimate father and invites the blacksmith to journey east with him and become a knight. Godfrey is loyal to the enlightened Christian king of Jerusalem, Baldwin IV (Norton), a leper who has not much time to live. However, Baldwin has instilled among his loyalists the idea of Jerusalem as a religious melting pot, home to Christians, Muslims, and Jews – a real kingdom of heaven. It is in this regard that Scott’s movie really takes flight: It becomes a canvas for ideas and ideologies in action. Balian goes with Godfrey because of his belief that in Jerusalem all sins can be erased; recruiters tout the idea that killing infidels is not murder but rather the path to heaven; Godfrey assures Balian that God is manifest in actions, not faith. Kingdom of Heaven occasionally groans under the weight of modern ideas, like Baldwin’s "kingdom of conscience," an expression more indicative of 21st-century thought than 11th. Yet the story’s parallels with the present are sometimes inescapable, as when Saladin’s fireballs catapulted at Balian’s castle strike an eerie resemblance to the "shock and awe" of the U.S.-led coalition’s initial assault on Iraq. The actors, too, lend a sense of decorous believability to the characters, although Bloom’s Balian often exudes a more matinee-idol polish than true gravitas. Nevertheless, the top-lined Bloom may add to the box-office draw, and with the arrival of the hotly anticipated thriller Domino later this summer from Ridley Scott’s brother Tony, the Scott brothers may prove themselves to be the real boys of summer 2005.