Here’s an interesting surprise: Dour, dry Duchovny’s directorial debut is more weepy than creepy, a conventional coming-of-age story that flashes back to 1970s New York City. Tommy (Yelchin) is a smarty-pants scholarship student, the only son of a widowed nurse (Leoni) who staunches her grief with cigarettes and pills. His best friend is Pappass (Williams), a "retard" – their word – who delivers meat by bicycle and cracks wise at the level of a 13-year-old boy. But when Tommy falls for a parochial schoolgirl (Zelda Williams, daughter of Robin), the friends realize Tommy is growing up – and Pappas isn’t. As you might expect from the synopsis, there’s good news and bad news here; the movie’s unabashed heart-on-its-sleeve stance and pleasant, unhurried neighborhood vibe have convinced me to start with the good. Yelchin (Hearts in Atlantis) is a marvelously engaging young actor, and the film gives him room to shine. It’s refreshing to see a story that treats teenagers as seriously as they take themselves. Despite its occasional forays into dumb humor – one painfully long scene makes sport of a French teacher’s malapropisms – the film takes for granted that adolescence is a topic worth exploring rather than a market worth exploiting. Yet the real star here is Badu, as an inmate at the titular institution (the Women’s House of Detention, that is) who advises Tommy through the bars of her cell, which opens to the busy sidewalk below. She’s warm and real and magnetic onscreen, even though her role is as confining as the hoosegow itself: "an angel in an Angela Davis afro," as Duchovny calls her on his much-trafficked blog. She’s the female variant of the Magical Black Person, whom you’ll recall from such mainstream Hollywood fare as The Legend of Bagger Vance and the Leoni-starrer The Family Man. Sure, she’s behind bars for some minor offense – most likely possession since she’s always clamoring for a dime bag from Tommy – but what she really cares about is helping a white kid dance, romance the ladies, and get "some pimp threads." Competing for oxygen is that other marginalized figure of yore: the chin-chuckingly cute, mentally challenged man-boy, who chugs soda and can’t control his scatological confessions. ("I shaved my ass once," he interrupts while Tommy is pitching woo to his girlfriend on a scenic balcony.) Of course Williams has a hammerlock on the part, and he seems to enjoy the opportunities for anarchy it affords, but this is lazy, stock characterization of the worst kind. The estimable Frank Langella pops in as a headmaster to liken the pair’s friendship to "the Machiavellian domination of a weak-minded and pitiful man," but it really amounts to the Machiavellian domination of the audience, as Duchovny vacillates between squeezing Pappass for laughs and deploying him as a sympathy prop. 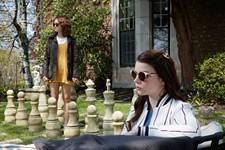