The Hitchhiker's Guide to the Galaxy

Forget about race, class, and politics. The world is more simply divided into two distinct groups, those who get Douglas Adams and those who don’t. The British author, who died in 2001 while working on the second draft of this film’s screenplay, was and is wildly influential (Terry Pratchett’s million-selling Discworld novels are a direct descendant), and this long-awaited adaptation of Adams’ main claim to literary fame arrives in a fog of expectation, and, in some quarters, dread. It’s good to report, then, that director Garth Jennings, one half of the duo Hammer and Tongs (best known for their music video for Britpop act Blur’s "Coffee and TV" single) has gotten Adams’ comic sensibility – which on the page involves much geeky wordplay, extreme puns, and an absolute inability to take anything seriously – down pat. Fans of the novel can exhale, finally; panic is unwarranted. On the other hand, audiences unfamiliar with Adams’ bizarre world may find themselves wondering what all the fuss was about and what, exactly, is going on in the film. Freeman (of the original, British version of The Office) plays Arthur Dent, who awakes one morning to find his home about to be demolished to make way for a freeway bypass. Luckily, his friend Ford Prefect (Mos Def), in reality an alien travel writer, pops ’round to inform him that the world is ending in a matter of minutes, targeted for demolition by a group of interstellar bureaucrats to make way for a hyperspace bypass. (This is the sort of ramrod irony Adams favored; it tends to work better in print than on the screen.) Ford and Prefect escape certain death by thumbing a ride on the alien’s ship, and from here on out it’s one loony adventure after another, all with a decidedly Monty Python-esque edge. Eventually, and through plot contrivances far too byzantine to get into here, the duo land in the company of Zaphod Beeblebrox (Rockwell), the narcissistic, double-headed president of the Universe, who comes across as a cross between all the bad Seventies hard-rock bands you can recall and seminal movie stoner Jeff Spicolli. Rockwell is blatantly over-the-top and he deserves his own film; when he’s off the screen the film loses much of it antic spark. There’s a love story in here, too, between former easy Earth girl Trish McMillan (Deschanel), who says she rechristened herself Trillian "because it sounded more spacey," and Arthur, the spineless British everyman who wins out (sort of) in the end. The real star of the film, however, is the Jim Henson Creature Shop artists, who manage to make the many elaborate and decidedly old-school creature effects come to hilarious life. Jennings should be commended for sticking as closely as he does to, if not the letter, then the tone of Adams’ work. One sequence involving a spaceship’s "infinite improbability drive" and an alternate reality in which everything appears to be made of yarn is worth the price of admission on its own. Still, if you’re not already an Adams fan, this film is unlikely to make you a convert. It’s nonstop chaos, and the everything-and-the-kitchen-sink style of comedy is taxing despite the frequent moments of pure comic genius. Familiarizing yourself with the book in advance – and Adams’ unique wit – is highly recommended. 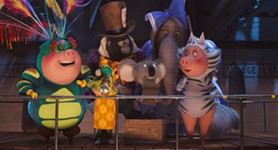 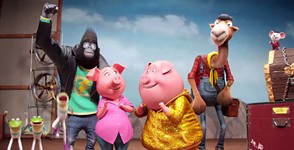 Sing
Animated film about a koala who stages a singing competition