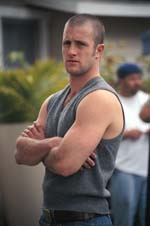 The actor Scott Caan makes a strong debut as a writer-director in this atmospheric character study in which he also co-stars. The second-generation actor, who is usually cast for his muscular physique in youth-oriented films like Varsity Blues and Gone in 60 Seconds, shows with Dallas 362 that he has been paying attention to the craft of filmmaking while spending time on those couple dozen movie sets. Dallas 362 sports lots of the rough edges common to first-timers, but Caan’s film also shows a real visual flair (Phil Parmet’s agile cinematography provides the film with a real boost), skillful rapport with actors, and an unusual degree of comfort with narrative ambiguity. In essence, Dallas 362 is a coming-of-age film in which the lead character, Rusty (Hatosy), must discover the truth about what he wants to do in life and then muster up the courage to defy the wishes of his mother and best friend and follow his dream. Caan’s strength lies not in his screenwriting (at least at this point), which becomes evident as some verbal groaners slip past. Yet he does wonders with this ensemble of four, creating a real sense of intimacy among them and establishing relationships whose parameters are fluid and realistic. Of course it helps that he has a wonderful ensemble to work with. Dallas 362 may be Hatosy’s best work so far, and Goldblum and Lynch remind us once again of their masterful acting chops (which often come and go, depending on the project). Lynch plays Rusty’s mother, Mary, who worries about all the bar fights he gets into with his best friend, Dallas (Caan), so she has Rusty see her therapist boyfriend, Bob (Goldblum). Of course, this emotionally incestuous relationship causes a few complications, but Goldblum manages to invest Bob with very human, nonomniscient traits that have him re-examining the porous personal and professional boundaries every step of the way. It doesn’t really require a shrink to figure out what’s troubling Rusty; however, the trick is to get Rusty to see what the matter is. There’s no doubt as to what the story’s conflict is (that’s clear with the film’s stunning opening shot that hurtles out from a fight that’s just broken out at a bar’s pool table and into the street), the only question is how the conflict will be ultimately resolved. The film’s opening and closing credit sequences, with their wonderfully constructed preamble and epilogue, show Caan’s filmmaking at its best and most fully articulated. We look forward to hearing more from him.