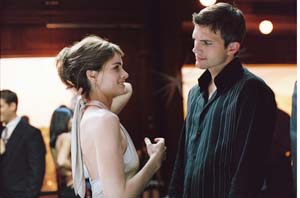 A Lot Like Love takes place over the course of seven years, but it feels like real time. It’s as if the script (by actor Colin Patrick Lynch) were pinched from Richard Curtis’ wastebasket: Strangers Oliver (Kutcher) and Emily (Peet) bump fuzz in an airplane lavatory and spend the rest of the film bantering cutely and coming thisclose to a real relationship, only to be thwarted by chance and putatively delightful misunderstandings. Will they get together? It’s hard to care, not because the answer is obvious – the answer is always obvious in the mass-market romantic comedy – but because the characters are so generic and tiresome that it’s like watching a long-form Taster’s Choice commercial punctuated with peppy AAA needle-drops, dorky montages, and creaky dialogue, delivered leadenly. ("Let go. Smile. You’re with me," the lovebirds entreat one another repeatedly.) These are people who stick things up their noses and spit water in restaurants to amuse one another, who chew with their mouths open for a laugh, who have tender moments while surrounded by product placement, who make continual reference to something called the "plan" (make money, buy a house, find the right person, create babies) without irony. They in no way resemble actual human beings; they are the chimera fabricated in story meetings at which takeout is served. There’s a wearisome coincidence waiting for them around every corner, and they’re surrounded by the kind of helpful meddling friends who flock about Bridget Jones. (One, a woman in the third trimester of pregnancy, calls her partner by the nickname "Sexy" – which is proof enough that these people exist only in movies.) When Oliver and Emily took off for a romantic interlude in Joshua Tree National Park, I scribbled in my notebook, "Are they going to be mauled by bears?" Sadly, this did not happen. When Oliver serenaded Emily in a scene, a small boy in the audience began wailing to his mother, "I don’t want to be here! I don’t want to watch this!" I could go on. Fortunately, Penn (the latter half of the Harold & Kumar duo) arrives as a dot-com asshole, puncturing the movie’s inflated air of cloying sweetness, and musician-actress Manning (who actually has a nice, scrappy quality) shouts repeatedly at Oliver, "You’re a dick!" I can buy Kutcher as the puppyish recent college graduate he plays as the film begins, but in a later scene with Emily, his pained declaration of "I’m almost 30!" brought titters from the audience. Peet, on the other hand, begins the film as a black-clad New York City punkish grrrl (albeit in a T-shirt for the Cult) and transmogrifies into a generic Brentwood singleton with yoga pants and Starbucks. The movie offers no explanations for this development aside from her association with a better class of men, which is evidently the sum total of female maturation. It’s tempting to blame the actors (who, shall we say, lack range?) for this debacle, but the whole production is simply as mediocre and half-baked as Hollywood gets. 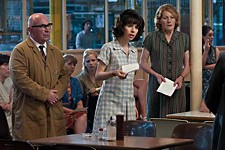 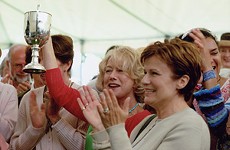