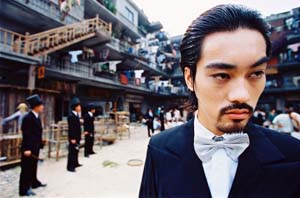 Like the director’s previous film Shaolin Soccer, Kung Fu Hustle is a manic, hyper-entertaining blend of classic kung fu tropes (some might say clichés), special effects, and outrageous comedy. Unlike Shaolin Soccer, however, this time out Chow’s cinematic genius has made it to our shores unmolested by the distributor, in this case the sage Sony Pictures Classics. Chow’s previous film suffered a fate nearly worse than death when Miramax unwisely chose to recut, rescore, and redub the film before unceremoniously dumping it on the domestic market with zero fanfare. Not so Kung Fu Hustle, which would almost certainly generate enough excited word-of-mouth to find its target audience, even without the barrage of TV ads and print marketing. Of course, it helps immensely that that demographic is found under the heading "film fans." This is as pure and downright fun a cinematic experience as you’re likely to have all year: part chop-socky battle royale, part Chuck Jones-and-Buster Keaton-inspired gonzo romantic comedy, and part MGM musical run amok. It’s all choreographed and art-directed to the nines, too, which makes it as pleasing to the eyes as it is to your pulse, which you’ll find pounding relentlessly throughout. Director Chow plays Sing, a down-at-the-heels gangster wannabe who wants nothing more than to join up with the deadly Axe Gang, an all-dancing, all-maiming outfit intent on adding the penniless residents of Pig Sty Alley to their swollen rolls of kickback thuggery. This proves more difficult than imagined when the tenement’s landlord and landlady (Yuen Wah, Yuen Qiu) turn out to be but two of a coterie of retired kung fu masters who’ve made this seedy little hamlet their twilight home. When Sing is tapped by Axe leader Brother Sum (the rivetingly sleazy Chan) to act as patsy for the gang, chaos ensues, but not before a long-lost love is revealed; Good and Evil (and Indifferent) unleash a feverish, effects-heavy tango of sublime action set-pieces; and everyone flies through the air with what appears to be the greatest of ease, thanks to Matrix fight choreographer Yuen Wo-ping, who outdoes himself here to the point of ridiculousness. Kung Fu Hustle is ridiculous, but it’s the same kind of inspired, artful cinematic lunacy that Americans (and apparently Chow) have bathed in since birth – images of the Road Runner and Wile E. Coyote will come to mind, as will Busby Berkeley numbers, torrid Hollywood romances, and any number of other genre-specific lifts. Half the joy of watching this wonderful carnival of insanity is in playing "spot the homage," and when you’re not busy taking note of Chow’s many influences, you’re likely to be laughing out loud at his exquisite comedic timing and wondering why on earth no domestic directors are fashioning movies this plainly pleasurable. Chow and his actors – among them former Bond girl Yuen Qiu – are all hilarious in their respective roles, backed by a sweeping, full-orchestral score and some seriously breathtaking visuals. If there’s anything to complain about, it’s that there may be too much action in what is essentially a riotous comedy. But that sort of nitpicking is like saying there’s too much money in the bank to close the vault securely. Kung Fu Hustle is simply a wild and crazy roller-coaster ride that keeps topping itself every 10 minutes. It’s a short, sharp, shock to the cinematic system that’s virtually impossible to dislike, and if you don’t leave the theatre grinning your face off, then, buddy, movies just aren’t for you. 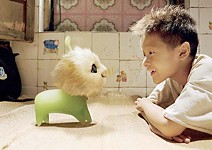 CJ7
Known for his manic comedic style, Chinese filmmaker Stephen Chow tries his hand at a kids movie, but sadly, the result is a cutesy and sentimental story we've seen dozens of times before.