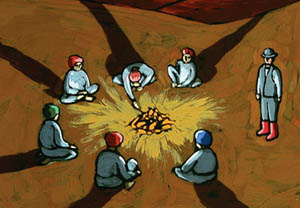 This second incarnation of the Mike Judge- and Don Hertzfeldt-produced animation anthology is, if anything, even better than the first. Eschewing the everything-and-the-kitchen-stink of Spike and Mike’s annual Sick & Twisted programs (which generally find a spot for Hertzfeldt’s wildly popular animations), The Animation Show is a lovely, refined collection that will remind viewers not only of the myriad forms that animated films can take but also of the sheer otherworldliness inherent in the form. These days the major studios have sunk knee-deep in computer-graphic animation, netting both good (The Incredibles) and bad (Shark Tale) results. Curators Judge and Hertzfeldt obviously realize that a computer program is just another tool in the animator’s bag of tricks, and it’s heartening to see that only two of the 12 international shorts here are pure CGI. Tim Miller’s "Rockfish" is one of them, and it’s a keeper. It’s the story of a burly interplanetary fisherman and his alien pet, who encounter the mother of all fish tales while visiting a distant planet that looks suspiciously like George Lucas’ Tatooine: It’s full of breakneck pacing and riveting CGI and is being made into a feature voiced by the Iron Giant himself, Vin Diesel. For more poetic fare, there’s Wendy Tilby and Amanda Forbis’ "When the Day Breaks," which features anthropomorphic animals silently moving through an eventful morning that feels part Chekhovian, part Orwellian. Speaking of paranoia, The Animation Show’s opening salvo comes from longtime favorite Bill Plympton: "Guard Dog" continues the animator’s tradition of colorfully violent imagery in a story of one canine’s desperate bid to keep his beloved master safe from all manner of probable attackers such as gophers, butterflies, and evil little girls with jump ropes. However, this is Plympton’s surrealist universe, so bad things happen to good dogs (and people) no matter how vigilant they may be. Austin’s Jen Drummond, a former Waking Life animator, uses Bob Sabiston’s proprietary rotoscoping software to fine effect in the documentary "F.E.D.S. – The Art of Slinging Samples," which reveals the not-so-hidden world of supermarket sample stands. Fans of Flat Black Films will recognize Drummond’s name from the old Sabiston/Tommy Pallotta "Snack and Drink" short and, if nothing else, this new film will make you want to head over to Central Market to dip in the free noshables sections. Johnathan Nix’s "Hello" is an endearingly romantic tale of a kid who has a cassette-only boombox for a head and falls for a girl with a compact disc noggin. Their amorous foibles are resolved, ultimately, by a hand-cranked blast from the past. Finally, there’s what everybody’s been waiting on for the past four years: Hertzfeldt’s new film, "The Meaning of Life." It’s as bitter as you might expect from the man whose "Ah, L’Amour" so cleanly and hilariously dissected the true nature of love a decade ago. Hertzfeldt’s stick-figure animations are complemented here by painterly effects that add an entirely new dimension to his already unmistakable style. This isn’t "Rejected," however; "The Meaning of Life" chronicles the whole pantheon of human existence with a seriously jaundiced eye. Backdropped by the soaring notes of Tchaikovsky, it’s his most ambitious and mature (i.e., more smarts, less comedic mayhem) film to date. The literally universal truths expressed within – all of them pretty glum, by the way – hearken back to morbid Viennese existentialism: We’re doomed, he tells us, doomed. Thank goodness we’ve got Hertzfeldt and company to take our minds off all that angst with such revivifying imagery. (Don Hertzfeldt will attend Saturday's 9:25pm show and Sunday's 7 and 9:25pm shows.)