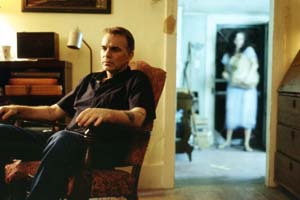 You might not know Ray McKinnon’s name, but you probably know his face: as a serial killer from a later episode of The X-Files, as the Reverend H.W. Smith on Deadwood, as the unfortunate hayseed who courts Holly Hunter in O Brother, Where Art Thou? He’s the go-to guy when Hollywood needs a profligate or weird-looking Southerner. He’s also the director, writer, and co-star of this oddly pitched but wholly memorable drama set in the Arkansas Ozarks. Dare I suggest that when three of a film’s stars are also its producers – and not the Weinstein brothers or Tim Bevan – then what you have is honest-to-peaches independent cinema, and it’s not always pretty? Chrystal is not a pretty film, even though it begins with the most ingeniously lit opening shot in recent memory, and Adam Kimmel’s fluid cinematography immerses the busted, rusted rural landscape in verdant languor. Moments of the film are sublime to see and hear – Stephen Trask’s original score bookends some stunning selections of mountain music, as well as songs performed by Harry Dean Stanton and co-star Blount (an Arkansas native who has an eerie, jagged singing voice) – but the characters struggle with a hardscrabble existence. Chrystal (Blount) is a mother left childless years ago when her drug-running husband, Joe (Thornton), ran their car off a two-lane highway during a police chase, killing their four-year-old son and leaving her with a broken neck that still pains her. Joe returns from prison to find Chrystal still living in their house but barely speaking to him (indeed, the film’s first several scenes have no dialogue at all); she’s a hollowed-out shell of a woman. Joe makes a bed on the front porch and begins working to regain her trust, but chance threatens to draw him back in to a life of crime. The film isn’t seamless, and its last act reaches for epic gravity on a Shakespearean scale (with Thornton as a sort of backwoods King Lear), exceeding its grasp. Better is the slow build of the first half, which finds Thornton taciturn and almost painfully restrained – a quiet man burdened by his secrets – and gives generously to Blount. Hers is the showy role: the physically infirm and psychologically fragile wife stopped in time at the moment her child died. Blount’s performance is so brave it’s awkward to watch at times, uncomfortably open. The tone of the film teeters between gut-wrenching realism and grand, operatic fatalism. It’s a tricky balancing act, perhaps even a questionable and ill-advised one. (One gimmick used to move the plot along, involving a pair of traveling musicologists, is totally unnecessary.) But this is the kind of film you want to praise for what it attempts to accomplish, even if its success is mixed. Even at its most contrived, the filmmakers believe in this project so passionately that its atmosphere seems absolutely real. 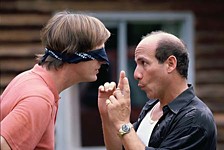 Randy and the Mob
This Southern-fried comedy, directed by and starring Ray McKinnon, is a flat-footed take on the suburban Southern gentleman in disrepair.