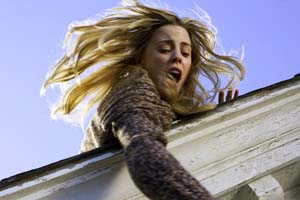 It’s a shame that the final film from MGM, which has just been bought by Sony, is this routine remake of a 1979 horror classic. Although the original Amityville Horror represents no great triumph of style or acting, it is an effective little tingler whose frights are steady, implied, and cumulative: We don’t see the things that go bump in the night so much as hear, feel, and sense them. In both films, the intrepid Lutz family (mother, stepfather, three kids, and a dog) purchase a house in which grisly murders occurred the year before, and in both films it takes 28 days before the family runs screaming from its dream home. In the original the scares and odd events are incremental and sometimes possible to explain away, but in the remake the frights are such that you’re wondering why the stubborn Lutzes don’t flee after the first night. Obviously, the filmmakers were keen to remake this film exactly because the technological advances of the last 25 years now permit more graphic displays of horrific imaginings and computer enhancements that can render the invisible world visible. Strategically, the new Amityville never intended to go for the subtler, implied horror of the original; this one would be all about scaring the pants off viewers. And in this, the movie generally succeeds as sudden scares and flashes of yucky imagery cause audience members to yelp aloud as if on cue. The real unifying aspect of the new film is producer Michael Bay, who also produced 2003’s Texas Chainsaw Massacre remake, which also was heavily promoted as being "based on a true story," and was populated with fresh-faced TV newcomers and directed by former advertising whizzes. That the "truths" supporting both films belong more to the realm of urban legend than historical fact seems to be a Bay constant, as is his tendency to favor shock-and-awe narrative techniques over quiet wonder (see Armageddon and Pearl Harbor for examples). Stars Reynolds and George (almost the spitting image of Sandy Dennis) are serviceably good as the young married couple tossed from their moorings, but they function mostly as buff figures to be moved around in service of the next set-piece or scare. (And know that some of the images are disturbingly graphic; for example, this: a finger forcibly pushed down to the knuckle into a bullet hole through a head.) Aside from the visual differences between the two Amityvilles, the other main divergence has to do with the theme of rationalism vs. spiritualism. In both cases, the Lutzes are rationalists who get their new home for a great price and are able to make sense of all the peculiar goings-on since they moved in. Yet, a Catholic priest is introduced only in the last third of the new movie, while he is front and center in the first. The original Amityville should be seen in terms of a string of Seventies haunted house movies that began in 1968 at the Dakota apartments with Rosemary’s Baby and goes through The Exorcist and The Tenant before morphing into the effects-driven model of the Eighties with Poltergeist. The most irritating aspect of the new movie, however, has nothing to do with comparisons but rather with some of the inherent illogic of the story. Why are we seeing images of a hanged girl when we know she’s been shot in the head? Images seem to be grafted into the film that have little to do with the actual story. Maybe it’s a technique that succeeds within quick advertising spots, but it piles confusion onto the art of storytelling. 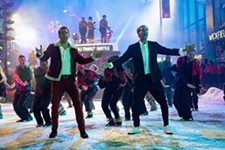 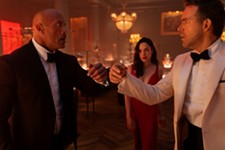