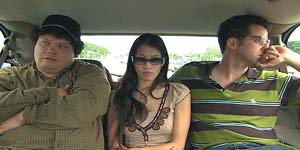 If you’re familiar with Frat House, the 1998 festival smash documenting fraternity culture and its rituals, you’ll understand why co-director Gurland’s second narrative feature is a gleefully jaundiced mockumentary about another icky slice-of-life, the "international matchmaking" service. The premise is simple: Filmmaker Andrew (Gurland) pays the expenses of Adrian (Martinez), a Queens doorman buying a bride (Yuan) from Burma, in exchange for the opportunity to film the proceedings. The young woman’s name is Lichi, and she likes puppies, and when she steps off the plane, she’s modestly dressed and subordinately cowed. So of course Adrian, who’s a dirtbag, promptly sets her to work cleaning the toilet, making "chili" out of ketchup and canned beans, and shooting amateur porn in the basement. Andrew can’t stand to see Lichi exploited, so he steps in to save her. But he’s a dirtbag in his own way, and Lichi might not be such a naïf after all. It sounds grim on paper, and maybe it is, but the film is surprisingly droll and delightful, too. There are rollicking scenes of domestic discord – Lichi turns out to have a pig fetish and breaks the bank buying ceramic tchotchkes which she arranges around Andrew’s stiffly tasteful apartment – and a third-act development involving the sound recordist’s dotty father (Thornton) is hilarious. The best surprise is Yuan, the daughter of Hong Kong actress Cheng Pei-Pei. She has great screen presence and invests Lichi with a mix of kitty-cat cuteness and hellcat ferocity. It’s easy to see why everyone falls for her, and she comes away as the film’s most sympathetic character (if, in fact, there is a sympathetic character in the mix). She seems absolutely real among the semiprofessional cast, who mostly play caricatures of themselves. The documentary premise slips a bit here and again (we have access to moments we shouldn’t logically have access to, even among camera-mad Manhattan narcissists like Andrew), but Botko and Gurland have so much fun satirizing themselves that it’s hard to quibble. If the depiction of a catalog bride as anything other than an innocent victim seems queasily racist (or, for that matter, if the depiction of a blue-collar schlub as a sexist dirtbag seems queasily classist), know that the filmmakers also savage the smug do-goodiness of dinner-party liberals, who put Lichi to work just as odiously under the guise of "helping" her. 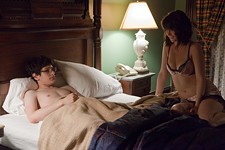 The Virginity Hit
This faux documentary chronicles the efforts of a 17-year-old kid to lose his virginity.