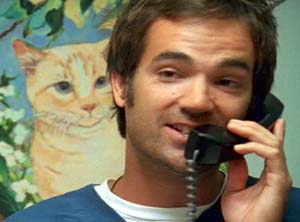 It starts out like Christopher Guest and ends up like P.T. Anderson, though at no point does it come remotely close to matching the light shot out by those luminaries. This, of course, is understandable. Greenebaum's superstylized first feature attempts to mesh the fiction with the nonfiction while remaining a narrative, and it attempts to do it almost entirely in the confines of a nursing home, entirely in one day. The residents are real. The story, including the documentary footage at its opening, is not. Aside from the continuity errors, the highlight reel of misery that eventually overruns the film (Greenebaum's camera stays trained on the at-times grotesquely infirm seniors like a Japanese tourist's would in Dante's seventh circle), the occasionally contrived music-video slicky edge, and the fact that there's no way on God's green earth that what takes place in Assisted Living happens in one day, it's a noble effort. Greenebaum is a talented writer/director, one with a bleached-out sense of setting and a certain boldness that might someday effect a masterpiece. Bonsignore is excellent as Todd, the protagonist and kind-hearted stoner orderly who befriends Mrs. Pearlman (Riley), a pre-Alzheimer's resident who confuses him for her estranged son, and the sense of humor amid deep melancholy is magnetic. Assisted Living was awarded the Grand Jury prize at the 2003 Slamdance Film Festival and also received awards at the Gen Art and Woodstock film festivals that year. The film was picked up for distribution by Cowboy Pictures, an outfit that shut its doors shortly thereafter, leading to this delayed theatrical release. (Review reprinted from the Chronicle's 2003 SXSW coverage.)