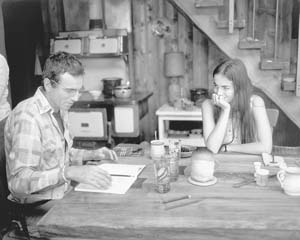 The Ballad of Jack and Rose

Miller’s evocative drama about an insular father-daughter relationship raids mightily from the closets of Freud and narrative symbolism to tell this story in which not very much happens in terms of outward events but whole seasons change within the inner lives of its characters. Strong performances and Miller’s equivocal stance toward her characters save the movie from its symbolic overload and melodramatic crash course, but in the end there may be less here than meets the eye. Filmed in a gracefully intimate hand-held style by Ellen Kuras, The Ballad of Jack and Rose allows us to observe characters without prejudging them. Yet at the same time, you can be certain that any film which opens to the eccentric strains of "I Put a Spell on You" is not going to end well. Jack (Day-Lewis) and his adolescent daughter, Rose (Belle), live in an abandoned commune on an island off the east coast of the U.S. Jack still lives according to the precepts of his former commune, and has raised Rose alone since her mother left them when Rose was still a child. Theirs is a happily isolated life, and their attachments to each other are fierce. Jack is suffering from terminal heart problems, and Rose has expressed her plan to commit suicide when Jack dies. Almost impulsively, Jack invites Kathleen (Keener), a woman whom he has been seeing on the mainland, to come live with them and bring her two sons, stating that both he and his daughter need a woman’s presence. Not having heard anything about Kathleen prior to her arrival, Rose reacts Oedipally to this Edenic interloper. By the time a snake is literally let loose, we know that paradise will soon be lost. Day-Lewis (husband of writer-director Miller, who is also the daughter of playwright Arthur Miller) is riveting, as always, to watch as an actor. His sunken frame shows off all the weight he lost to play the role of the sickly Jack. Belle has a strong presence, and she manages to gaze at Jack with the eyes of a naive lover rather than an ordinary loving child. However, Belle and the always effective Keener are saddled with roles that are too thin to develop much interest. Miller’s sole attention is poured into Jack, a weathered idealist who is still trying to build a world from idyllic notions. It’s quite reasonable to think that Jack is a monster who has socially isolated his daughter and raised her to the brink of suicide, yet Miller’s eye romanticizes rather than criticizes him. The Ballad of Jack and Rose is a tune that humorlessly circles back in on itself, sounding seductive in parts but leaving dissatisfaction in its wake. 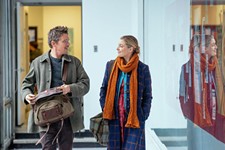