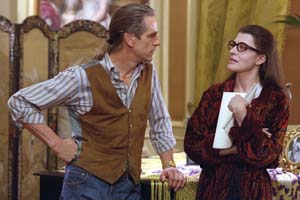 When it came to throwing a temper tantrum, no could come near über-diva Maria Callas, both literally and figuratively. From all accounts, she lived life as if it were high opera, regardless of whether she was on the stage or not. Famous for emotionally wrenching performances in works such as Norma and Medea, her dramatic/vocal genius was never captured on celluloid, leaving for posterity only the memory of her unforgettable stage presence. In Callas Forever, Italian film director Zeffirelli – who also directed Callas in some of her most famous stage roles – imagines the possibility of a filmed performance in the last year of Callas’ life at age 53. As the film tells it, she had become an embittered recluse in her Paris apartment by 1977, mourning the loss of her magnificent vocal gifts and the death of her great love, shipping tycoon Aristotle Onassis, who had betrayed her years before when he married the world’s most famous woman. A former producer and promoter (Irons, looking ridiculous in a ponytail) ultimately convinces the melancholy Callas to reconnect with the outside world by appearing as the titular lead in a filmed version of Carmen. No matter that her voice is shot – she’ll simply lip-synch to her recording of the role made 22 years ago. It’s hard to imagine that anyone would ever propose such a project to an artist of Callas’ stature, much less that she would ever agree to participate in it. The film would have you view Callas mouthing her arias as something magical and not the least beat dishonest – after all, it is her voice – but in this day and age in which "singers" cheat their audiences of the real thing as a matter of course, there’s something undeniably icky about the whole concept. Zeffirelli and Martin Sherman’s script is frequently clunky as it spouts its exposition, and it requires an otherwise esteemed actress such as Plowright to recite lines that would make most performers turn three shades of red out of sheer embarrassment. (Plowright plays the film’s busybody music journalist as if she were a Seventies version of Hedda Hopper. You don’t believe it for a second.) The film might have been redeemed by Ardant’s performance as Callas. But for a rare glimpse of the diva’s ferocious appetite for life, however, this French actress seems all wrong for the part. Ardant’s Gallic composure and beauty are incongruous with the public persona that Callas cultivated – fiery, temperamental, mercurial, just this side of nuts. (If only Anna Magnani had been born 50 years later – what a Callas she would have made!) While Callas Forever seems sincere in its attempt to pay tribute to the world’s most famous opera singer, it unwittingly disserves her in its bizarre wish-fantasy about resurrecting the dead. Go listen to one of the recordings she made during the zenith of her career. That’s the best way to keep this legend alive. 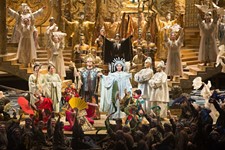