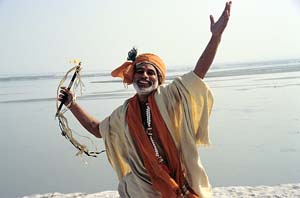 As a fascinating, confounding portrait of "the longest running religious festival in history" – the Kumbh Mela in Prayag, India – Short Cut to Nirvana offers Westerners a tantalizing glimpse into this 70 million-strong, once-every-12-years event that by dint of sheer overwhelming humanity eclipses all other religious pilgrimages on Earth. For 2,000 years, the Kumbh Mela has attracted the Hindu faithful from all corners of the globe (the Americans included here all seem to be appropriately photogenic college-age seekers) for what, at first glance, appears to be a titanic carnival of spiritual and secular chaos, packed with orange- and yellow-robed swamis, gurus, acolytes, and the curious, who are all crowded into one dust-choked city-state that rivals anything in the Old Testament for sheer grandiose overkill. Benazzo and Day’s doc doesn’t offer much in the way of explaining the thousand different sects that come together and coexist harmoniously (or cacophonously, as the case may be) for the duration of the festival, but their "holy cow!" sense-of-wonder style of filmmaking – replete with dozens of spot interviews with oddball holy men, including one 60-year-old whose spiritual claim to fame is holding his right arm skyward for several years ("God has given me a degree in willpower," he explains) – is infectious. The massive scale of the Kumbh Mela would seem to preclude any comprehensive documentation of its full scope, but the filmmakers skirt around this by pointing their lenses at anything and everything, ending up with a satisfyingly eclectic mix of the strange, the bizarre, and the holy that makes the Black Rock Desert’s Burning Man festival look like an dowdy ice-cream social. Predicated on an ancient, 12-day battle between the Hindu gods and demons who were fighting over "the nectar of immortality," the festival is a hybrid of the sacred and the profane, with pilgrims washing themselves in the frighteningly murky waters of the Ganges before heading back into the throngs of the Great Unwashed for lengthy chanting and prayer jags before heading back out to catch any one of the thousands of religious street-theatre performances that appear seemingly out of nowhere every evening. It’s as much a time for partying as it is for praying, and although Short Cut to Nirvana is very much a Western production (in the sense that it watches the chaos unfold through non-Hindu eyes), it’s still a remarkable and enlightening (although perhaps not to the point of nirvana itself) film. 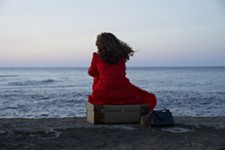