It isn’t quite the Eagle’s Nest, but the members of 2/3 Field Artillery (nicknamed "the Gunners") must have felt they were part of something historic when they moved into the weekend party palace of Uday Hussein. Not many other units stationed in Iraq could call a presidential palace – fully loaded with a pool, golf course, and stocked fishing pond – their home away from home. Documentarian Michael Tucker, who lived with the regiment for two months, enjoys full access to the Gunners, from their poolside antics to the far more sobering responsibilities of patrolling the streets of Baghdad and conducting night raids. Gunner Palace begins shortly after "major combat" has been declared over and done with; if this mostly objective document has one point to make, it is that "minor combat" is an oxymoron. Gunner Palace succeeds as a series of snapshots of the post-war landscape, in which soldiers are now tasked to function as "policemen, social workers, and truant officers." One of the biggest dangers plaguing them are roadside bombs, which can be planted anywhere. Tucker’s camera watches as traffic is held up for 15 minutes in order for troops to secure a plastic bag. A soldier shakes his head at the ludicrousness of the scene, but we are reminded here and throughout: What happens when that plastic bag isn’t just a plastic bag? The answer’s obvious enough, and indeed, several of Gunner Palace’s interviewees suffer injury, even death. The news of their deaths is shocking, if statistically inevitable; however, the filmmakers somewhat mishandle this news. With so many soldiers interviewed, some only fleetingly, it’s impossible to keep track of them all; the name of a dead soldier did not register with me, although I’m sure his face would have. Gunner Palace has the ability to personalize these deaths (something the American public, largely shielded from this war, has not been confronted with), and in this instance the filmmakers drop the ball, lending further, tragic credence to one soldier’s address to the audience: "For y’all this is just a show, but we live in this movie." 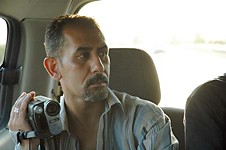 The Prisoner or: How I Planned to Kill Tony Blair
Documentary from the filmmakers who made Gunner Palace details the story of Yunis Abbas, an Iraqi journalist falsely detained for nine months at Abu Ghraib.