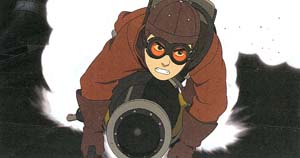 Director Ôtomo is best known stateside as the man behind 1998’s animé landmark Akira and 2001’s equally stunning Metropolis, but Steamboy, 10 years in the making at the unfathomable cost more than $20 million U.S., is his most personal, and most personable, film. The cyberpunk dystopia of Akira, with its roving gangs of 5,000cc motorcycle maniacs and apocalyptic visions, is replaced this time out with an almost elegiac story set in the Victorian era, a place and time that’s part British period piece, all bowler-bedecked Mancunian propriety and gee-whiz gadgetry, and part Amazing Stories. There’s none of the soul-wearying cynicism of Ôtomo’s previous masterworks, and in fact, if anything, the optimistic Steamboy plays like an ode to the possibilities of the creative act. That act comes here with the invention of a device known as the "steam ball," a new, mechanical source of limitless energy that is at the heart of Steamboy, and as always, the possibility of using such magnificent power – for good or evil – is the crux of the matter. Invented by the father and grandfather of Young Ray Steam, the steam ball is eagerly sought after by the O’Hara Foundation, a sinister proto-technology corporation that aspires to, well, if not world domination then at least a healthy market share in the steam-powered doohickey demographic. Chosen to guard the device until someone can figure out what to do – or not do, as the case may be – with it, the invention-happy lad must outwit legions of nefarious do-badders in what becomes one of the most entertainingly protracted chase films ever animated. Ôtomo’s storyline is near simplistic when compared with much of the indecipherable philosophical musings of his previous outings. However, denuded of any cyberpunk philosophizing, the film aspires to and achieves a dazzlingly straightforward rush that finds its protagonist in astonishing action set-piece after set-piece. You barely have time to catch your breath after he’s captured aboard a roaring locomotive (via a zeppelin snatch, natch) before it’s on to the next gorgeous bit of mind-bending, Tom Swiftian-adventure, all of which ends in a lengthy but genuinely pulse-quickening multiclimax that should have die-hard animé fans as well as the rest of us gnawing their nails to the quick and beyond. As ever, Ôtomo’s attention to the most minute details of setting and character are beyond reproach. If Victorian Manchester had been remotely like this, H.G. Wells never would have bothered to pen The Time Machine – he’d have just stepped outside and into the fray.