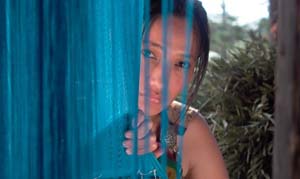 A film within a film encapsulated by a clever and very accurate anti-materialistic Buddhist morality lesson, Travellers & Magicians feels a bit like Chaucer’s Canterbury Tales as retold by Siddhártha. Norbu previously helmed the impossible-to-dislike The Cup, which followed the travails of a group of Tibetan monks desperate to find a way to watch the World Cup, that most secularly religious of human events (everywhere except, to our immense disreputableness, in the U.S., of course), and while this follow-up is made of different stuff, it’s just as concerned with the lure of the modern as it dips its fickle paws into the traditions of the past. Dendup plays Dondup, a minor governmental official recently assigned to a remote Bhutanese backwater where, as he complains, there’s little else to do but sleep. Not so for the local menfolk, who fill their days with archery tournaments and pass the time with seeming ease. "Life moves more slowly here," a friend tells the bored Dondup, but having come from "the big city," he’s hardly in a position to appreciate it. When a letter arrives from an acquaintance in the Bhutan capital informing Dondup that a chance to get an American visa is at hand, the restless fellow packs his bags and rushes to catch the local bus, which runs sporadically at best. He misses it, however, and so, with his "I Love NY" T-shirt and a powder-blue Samsonite under his arm, he sets out walking. Along the way he attracts a motley assortment of unwanted co-travelers, including a peripatetic farmer and a monk (Kinga), who, to pass the time, tell the tale of a magician (Dorji) and the fate that befalls him when he, too, fell prey to the call of the open road. Giving any more away would be unfair, as Norbu’s film is rife with subtle allusions and parallels between the here and now and the then. The cast, almost entirely made up of amateurs, is remarkably unamateurish, and Dendup is alternately hilarious, as he channels Z-grade American heavy metal from his battered boombox while performing some of the worst air guitar moves yet conceived, and genuinely affecting, as he becomes enraptured by the monk’s ongoing tale and eventually comes to realize perhaps not all things Western are worth their weight in dreams. Norbu’s film runs on a tad longer than necessary – traveling at the pace of a wounded mule, the group takes forever to reach its destination and occasionally the film has the feel of a road movie that’s read the map wrong – but the Himalayan scenery, majestic mountains, and verdant valleys are as breathtaking and well-shot as one could hope for. Getting there, after all, is half the fun. 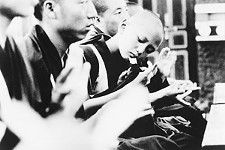 The Cup
Filmed in Bhutan with a cast of unknown Tibetan nonprofessionals, The Cup takes its charming premise – pint-sized monks striving against all odds to watch a satellite broadcast of the 1998 World Cup match between Brazil and France – and runs with it.