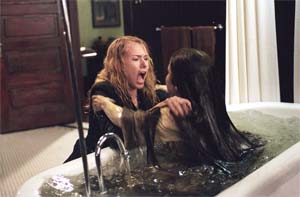 The Ring Two may be the dampest movie since Waterworld, but it’s not half as entertaining watching Watts and Dorfman reprise their haunted mother/son roles in this sequel as it was seeing Kevin Costner recycle his own precious bodily fluids. This is the follow-up to Gore Verbinski’s Americanized remake of Hideo Nakata’s landmark Japanese horror film which is (like Takashi Shimizu’s recent self-helmed do-over of The Grudge) a superior effort in its original form – even though that American remake never came within striking distance of Ringu, Nakata’s original film that kicked off this many-sequeled, international franchise. Having passed on the first film’s cursed videotape – which leaves anyone who watches it with a twisted rictus of terror disfiguring their features (much like The NeverEnding Story II: The Next Chapter) – Rachel (Watts) and her son, Aidan (Dorfman), abandon Seattle and the malicious, televised wraith of drowned girl Samara (Stables) in favor of a quiet, less ominous community down the coast. "We didn’t do anything wrong," Rachel says by way of consoling her wiser-than-that offspring. "We did what anyone would do. We started over." But of course there’s no starting over in a Nakata film, and before long Aidan is exhibiting odd behaviors, such as going into strange trancelike states and suffering from inexplicable bouts of hypothermia. Samara, with her Chrissie Hynde-meets-Cousin Itt hairdo and pruney skin, has returned to possess the boy, which leaves his mother little to do but drive around and attempt to figure out how to save him, again. The Ring Two suffers from narrative listlessness and a general sense of "so what?" Worse than that, however, is the utter lack of scares. This is, after all, a horror film, and one expects at least one or two good frissons along the way, but no, the creepiest scene we get involves an angry deer and a lonely forest road. Watts seems hamstrung by Ehren Kruger’s scripting, which doesn’t offer her much in the way of a character arc, or much to do at all, and Dorfman’s Aidan is by turns silly and predictable. Admittedly, the thankless role of "possessed child" is a landmine for any young actor, but surely there’s still more to it than a creepy smile and the overdramatic use of the word "mommy." You can tell things are really going down the drain, literally, when Sissy Spacek shows up in a pivotal role and fails to register. It’s only at film’s end that you realize the whole soggy, overlong mess isn’t going to go anywhere. Like poor Samara, it’s dead in the water.