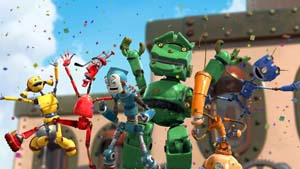 The Saturday morning screening was packed with the appropriate audience – little tykes, their faces happily stuffed with popcorn – and they seemed appreciative. But a crucial error was made, in my mind at least, when they screened the preview for Ice Age 2 prior to the main feature, Robots (which is the latest animated feature from Ice Age directors Chris Wedge and Carlos Saldanha). All it took to get me giggling helplessly was a slim couple of minutes of the continuing adventures of Scrat, Ice Age’s hapless squirrel/rat, forever thwarted in his efforts to retrieve an acorn. It’s hard to put it into words – even more so considering Scrat charms entirely through grunts, squeaks, and shrieks – but there’s something there, that elusive quality of magic. You know it when you see it, and while I searched mightily for it in Robots, nothing ever had me giggling again as did Scrat in his two-minute trailer. Set in a land populated entirely by, you got it, robots, Robots tells the story of a boy from the ’burbs who conquers the big city. Rodney Copperbottom (voiced by McGregor) and his family don’t have much – Rodney has to suffer the indignity of his female cousin’s hand-me-down parts – but what they lack in buck they make up for in pluck. As a wide-eyed young robot, Rodney idolizes inventor and philanthropist Big Weld (voiced by Brooks), who preaches that "anyone can shine, no matter what they’re made of"; nearing the end of adolescence, Rodney decides to go to the big city and show Big Weld one of his own inventions. Turns out he’s a bit late: Big Weld has retreated to his playland palace and handed the company reins over to the scheming, preening Phineas T. Ratchet (voiced by Kinnear). Phineas has instated a new slogan at HQ – "Why be you when you can be new?" – and has abolished old parts, meaning the have-nots are destined for meltdown unless Rodney can save the day. There’s something cheekily subversive there in making the bad guy, more or less, a Madison Avenue suit; co-directors Wedge and Saldanha did much the same in Ice Age by slipping in a pro-ecology, pro-vegetarian message. But where Ice Age was spare, even elegant at times, Robots is a terrible clutter, in both visual and story terms. The landscape is gosh-wow but so chaotic and overdrawn it’s hard to appreciate the obvious artistry on display, and the story is crammed with too many wise-cracking characters, very few of whom linger long on the brain. The movie can be funny in fits, but too often the scripters go for the obvious and uninspired (call me an old grump, but robots perfecting the underarm fart is strictly bargain-bin material). Robots nails the message – and it’s a worthy one – but the magic’s missing in action. 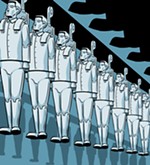 Letters at 3AM: What Are Human Beings For?
No I, only robot