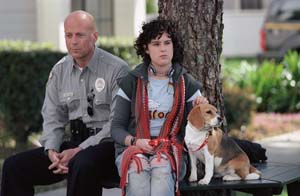 Poor Bruce Willis. He can’t catch a break: He keeps seeing dead people in movie after movie. In Hostage he plays LAPD hostage negotiator Jeff Talley, who moves to the countryside to take a job as the police chief of sleepy Bristo Camino after making a bad call during a hostage standoff in which the victims die. Racked with guilt, he manages to tuck himself away in his new low-crime hamlet, and his frustrated wife (Serena Scott Thomas) and daughter (Rumer Willis, the actor’s daughter) try their best to understand. But crime is pesky, and it invades the sleepiest of towns, and Bristo Camino is no different. The crime is a doozy: Three young thugs take a rich family on the hillside hostage and kill one of Talley’s deputies. Secrets harbored by the paterfamilias (Pollak) however, turn this self-contained crime scene into a far-reaching lollapalooza that puts the lives of Talley’s wife and daughter in jeopardy. Willis is a pro at playing these kinds of sensitive tough guy roles, and while his performance in Hostage is yet another sterling example of this capability, nothing new is added to the formula. Director Siri has a stylish eye that makes this film resemble a film noir outing, but the script (by Doug Richardson) is at first routine before growing increasingly outlandish. The second hostage-taking makes the story unnecessarily convoluted, and the young thugs are without dimension. The film gets caught up in literal metaphors, like the blood on Talley’s hands and his slo-mo races to the rescue. Willis co-produced this movie, so we should take it as a sign of his desire to step back into these crime-fighter roles. But without a bigger infusion of originality, the effort is going to die hard.