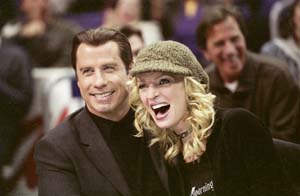 Waiting a decade before trotting out a sequel to a hit film is relatively rare and usually bodes desperation on somebody’s part, but this star-packed sequel to Barry Sonnenfeld’s Get Shorty (1995) manages – just – to steer clear of the usual creative mismanagement by sheer dint of its packed-to-the-rafters script, courtesy of Peter Steinfeld (working from the novel by the always reliable Elmore Leonard). Director Gray (The Italian Job) and Steinfeld toss in everything, and then pile on more and yet more improbable plot devices until something, anything, sticks and gets a laugh. As the film opens, Travolta’s ex-Brooklyn enforcer Chili Palmer is sick to death of the film business he embraced in Get Shorty. He’d much rather be in the far more congenial music biz and gets his chance when pal Tommy Athens (James Woods in a brief cameo) is gunned down by the Russian Mafia, leaving his star diva-to-be (Milian) in the lurch. Taking her under his raven’s wing, Palmer hooks up with Athens’ ex, Edie (Thurman), while dodging unscrupulous scam-masters at every turn. It’s a kick to see Travolta and Thurman tearing up the dance floor once more, but you could make a case that the former Vincent Vega is playing it a tad too cool here; half the time he appears positively glacial, more weary than hip, more hip than hop. Such is not the case with Cedric the Entertainer’s bombastic parody of Death Row Records hardcase Suge Knight: Aided and abetted by no less than André "3000" Benjamin of Outkast, he simultaneously inflates and deflates the rap mogul’s tarnished legend. Most winning, bizarrely, is the Rock as a wannabe rapper, chauffeur-cum-strong arm, and vainglorious gay man desperate to make it big in the movies. He’s the most human of all the parodies here (and that’s saying a lot considering virtually every single character is a parody of someone or something). It’s a messy, overlong film, but it’s impossible to take seriously and therefore more than a little entertaining.