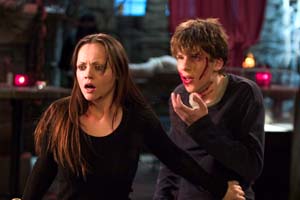 Note to Wes Craven: Portia de Rossi is no Maria Ouspenskaya, although, come to think of it, she could probably pull off Evelyn Ankers. Her brief appearance in Cursed, Craven’s much-plagued high school werewolf epic, is meant, I assume, as a homage to Hollywood’s iconic gypsy fortune teller Ouspenskaya, who originated the genre archetype way back in 1941 in George Waggner’s The Wolf Man. Cursed is teeming with homages, in-jokes, and mini tributes to lycanthropes and other beasties past, most notably John Landis’ An American Werewolf in London and most unlikely David Cronenberg’s Rabid (lycanthropism as an STD, you see). That’s what you get when you hire former Dawson’s Creek-er Kevin Williamson to pen the script, I guess. Craven and Williamson were obviously hoping to rekindle the magic they brought to the Scream franchise, which, with its self-referential humor and jokey asides, gave the horror genre a desperately needed shot in the severed arm some years back. Alas, Cursed is an unmitigated disaster from frame one, entirely lacking the wry wit of Scream (or even the bargain basement panache of The Beast Must Die) and any real scares whatsoever. Ricci and Eisenberg play siblings Ellie and Jimmy, who are attacked by a werewolf and promptly begin sprouting pentagrams on their right hands, while leaking wolfy pheromones all over the place. Über-nerd Jimmy is suddenly able to best the entire high school wrestling team (shades of Teen Wolf) and non-believer Ellie is attracting unwanted male attention from all corners. Isn’t it hard enough being in a Kevin Williamson-scripted high school setting without having to worry about unsightly fur patches? Yeesh. Cursed also sports lengthy cameos from Scott "Chachi" Baio and Craig Kilborn, late of The Late Late Show, which dates the film badly since Kilborn is already a pop-culture nonentity. Reportedly recast and reshot more than once, Craven’s direction is flat and tiresome, while Williamson’s once-brilliant writing is little more than melodramatic pap. Even Rick Baker’s non-CGI creature effects come off as a pale imitation of his previous work in American Werewolf. Genre fans and newcomers alike should skip this monstrosity and go rent Ginger Snaps instead.