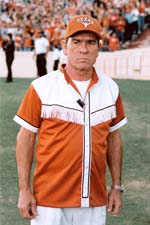 Silly and implausible, Man of the House has a tenuous relationship with anything we recognize as the real world, even keeping in mind that this is a comedy and not a real cop drama. The film’s relationship to Texas, however, is strong, and it’s likely to be warmly welcomed in the Lone Star State, where a goofy story about a Texas Ranger and the UT cheerleaders he is sworn to protect is what we like to watch anyway, albeit with a bit more football. Filmed here in Austin and on the UT campus (by director Herek, a former UT student), Man of the House has the feel of a home-grown affair, as lots of locations and businesses from Threadgill’s to Mangia Pizza are given their due in the storyline. Even Gov. Perry and his mansion get cameos in this movie. The movie does very little to set up the criminal activities that cause agent Roland Sharp (Jones) to move into a house with five cheerleaders after they inadvertently witness a murder. The filmmakers seem wholly uninterested in the set-up that puts the story in motion. They just want to move as quickly as possible to scenes of craggy Tommy Lee Jones waking up in a bathroom hanging with women’s undergarments or lamely posing undercover as an assistant cheerleading coach. And actually, this humor works better than it has any right to. The girls are perky enough and Jones dependable enough to persevere in this thing despite the odds of its working out. A romance between English professor Molly McCarthy (Anne Archer) and Sharp is perfunctory at best, as the girls whisper moves to Sharp through a hidden earpiece. Cedric the Entertainer has a tangential role, but one that allows him to show off his own cheerleading moves. (His jiggles and the girls’ jiggles stand in marked contrast.) Jones, like Robert De Niro, has turned from drama to comedy in recent screen roles, and while that sometimes yields a very funny payoff, it is starting to look quite rote. Both Jones and De Niro are too good to have such mediocrity be the capstones of their careers. 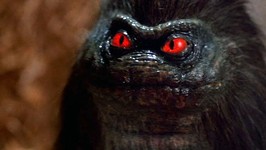