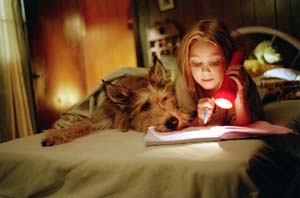 During one sun-dappled summer a cute girl (newcomer Robb) and a cute dog (dubbed Winn-Dixie) cure one another's loneliness, and through their companionship bring together the fractured inhabitants of a small Florida town. Based on the Newberry Award-winning book by Kate DiCamillo, Because of Winn-Dixie seems an unusual choice for director Wang, who, despite his success with the family-oriented book-to-screen adaptation of The Joy Luck Club and the recent Jennifer Lopez starrer Maid in Manhattan, generally tends toward adult fare. His new movie is truly family-friendly: It has a sincerity that should make it appealing to kids and their parents and also harkens back to the kind of old-fashioned movie that tells the heartfelt story of a kid and her dog. Robb plays 10-year-old Opal, who lives with her father (Daniels), whom she calls the Preacher, which is indeed his job. It's an occupation that requires them to move frequently, and because Opal's mother left them when she was 3 (something that is mysterious to Opal and about which her father is reluctant to talk) Opal is a loner in the tiny town of Naomi, Fl. After Opal and the homeless dog meet cute and go through some predictable “we can only keep him until we find him a good home” sequences, the story gradually heats up as Opal and Winn-Dixie begin to make some new friends. The musician Dave Matthews appears as the pet-store owner Otis, who can soothe the caged animals with his song. Veterans Eva Marie Saint and Cicely Tyson make welcome appearances respectively as the local librarian who spins a good yarn and the near-blind old woman who is thought to be a witch. Their work in the movie, along with Daniels' career-honed haplessness, make Robb's inexperience less noticeable while allowing us to focus on her lovely young face. There are no big surprises in Because of Winn-Dixie, but neither is the admonition against working with children and animals appropriate here. Because of Winn-Dixie should provide a pleasant family outing free of any cinematic mange.