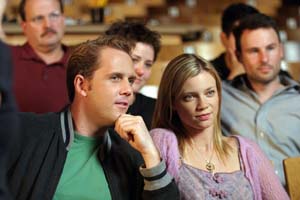 Bigger Than the Sky

Bigger Than the Sky tells us in no uncertain terms that theatre people are a breed apart: half-human, half-wood-nymph-and-satyr assemblages constructed primarily out of unchecked emotion, madmen and lovers to the last. As a stereotype, it’s not so far off – Shakespeare in Love for the Red, White, and Blaine set – but Bigger Than the Sky feels constrained by its unshakable predisposition toward actorly fawning. This film is so enamored of theatre folk and their lusty lot that you want to slap it about the face and neck and force it to go endure the inevitable hip-hop take on Beckett’s existential yawn – Waiting for Good Dough – just to watch it run shrieking to James Lipton to beg for clemency. The film adopts a dullard’s view of the proscenium arch as a comically romantic chapel for the social misfit and perpetual personal growth machine. Marcus Thomas plays Peter Rooker, a pathetically antisocial sad sack with, as he puts it, “a dull job and a dull life.” So lacking in interest is his lot, in fact, that his girlfriend has just left him in the lurch and presumably wandered off seeking a more intellectually invigorating romance with a starfish or possibly a bit of gravel. Thanks to some magical realism that wafts through Bigger Than the Sky whenever the script can’t find a better way to induce character action, Peter soon finds himself enrolling in the Portland Community Theater’s local production of Rostand’s Cyrano de Bergerac. Personal growth, you see. Surrounded by the dregs of Portland’s stagehounds – including Northern Exposure’s Corbett as a theatre lifer Michael and Smart’s nymphy, nervy Grace – Peter does indeed blossom, but his acting chops, for the most part, consist of line readings so wooden you could build a coffin out of them, plus a hangdog expression that suggests a recent beating at the paws of a schnauzer. There are some bright spots in this woefully earnest production, the most bizarre of which is a sequence involving a pompous and bloated theatre critic prone to elfin-tweezed eyebrows and sonorously catty pronouncements – Rex Reed as realized by William Conrad – but for the most part Bigger Than the Sky is awash in the obvious and sports a patently predictable outcome. Somewhere, Stanislavsky is shrieking as well. 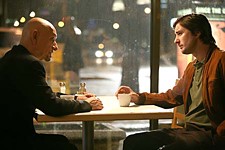 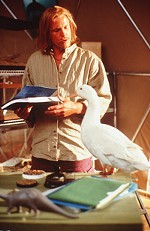 Scorched
The sleepy Desert Savings Bank is about to be hit – from here to Sunday and then some. Scorched is a new bank-heist movie cast ...