Son of the Mask Squarely targeted at the movie-going demographic that finds culinary ecstasy in Froot Loops-and-Jolt Cola pick-me-ups, marathon PlayStation weekends, and CGI-everything, this semisequel to 1994’s surprise breakout Jim Carrey vehicle retains absolutely none of its predecessor’s manic charm, and instead relies almost entirely on a ceaseless barrage of everything-and-the-kitchen-sink humor. While it tries mightily to parrot the classic animated worlds of Tex Avery and Chuck Jones, it nonetheless falls flatter than Avery’s libidinous Wolf post-steamroller on all counts. As Tim Avery, a budding cartoonist stuck in a dead-end advertising gig, Kennedy gets involved with the titular cursed mask after his dog drags it home and transforms into the wildly annoying, hyper-canine version of what looks like an outtake from John Carpenter’s The Thing, minus the grue. Not to be outdone, Tim soon ends up with the hideous wooden thing on his own puss, which results in a newfound skill at his job and a nightmarish romantic evening with wife Tonya (Howard) that nets – wait for it! – a mask-borne offspring. Christened Alvey (Liam and Ryan Falconer), the pint-sized hellion takes his cues from Cartoon Network and, in particular, Chuck Jones’ far-superior short "One Froggy Evening." Did I mention Norse gods Odin (Hoskins) and Loki (Cumming, still apparently on his Spy Kids Fegan Floop-high) are also along for the ride and out to get their missing mask back? It’s somehow comforting to know that kids will come out of this film with a very, very rudimentary understanding of Norse mythology, but something tells me that’s not what they’ll recall in the long run. Director Guterman shoots every jittery sequence as though on a sugar-bender, with editing to match. If the film’s nonstop CGI effects were anything other than just plain bad, this might be salvageable, but as it is the film can’t hold a candle to Joe Dante’s hellion kiddie effects in his "It’s a Good Life" segment in 1983’s Twilight Zone: The Movie, itself uneven but vastly more entertaining than anything seen here (with the possible exception of the spiky-haired Alan Cumming, who is always a welcome addition to any film involving characters sporting Mr. Sardonicus smiles). But for anyone who assumed Kennedy’s experiment couldn’t sink any lower than Malibu’s Most Wanted, there are, it appears, ever deeper depths in the realm of comedic misfires. 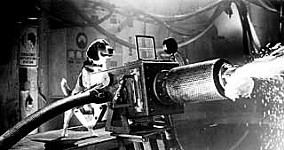 Cats & Dogs
The idea behind Cats & Dogs is such an obvious one it's a wonder no one's thought of it before. In the film's clever and ...