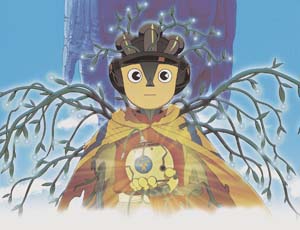 A Tree of Palme

With its deeply humanistic take on the Pinocchio story filtered through the prism of cyberpunk animé, Nakamura’s A Tree of Palme is a heady, dense metaphor for everything from the struggle for self-knowledge and personal growth to the aging process. Of course, it’s also a jaunty little film about an android puppet boy who just wants to be as human as possible and have a purpose in life beyond looking like a cross between every wide-eyed animé scamp you’ve ever seen and Little Red Riding Hood. Exactly how much emotional baggage you get out of Palme depends on how much you bring to it, which is a common enough yardstick by which to measure most Japanese animation. Nakamura, a key animator on watershed animé ranging from Akira to Robot Carnival to Dagger of Kamui, isn’t content to allow this robot-on-a-mission story to simply revel in gorgeous, dreamlike imagery. He’s also crammed it to bursting with enough cinematic allusions and philosophical meditations to give all of the robots in A.I. a run for their money. The many-layered storyline follows Palme, a robot child created by a Gepetto-like inventor to bring comfort to his illness-stricken wife, Xian. When she dies, Palme expires as well, and he’s first seen dangling from a snaky tree limb as though he were a cast-off bit of household detritus awaiting an otherworldly garbage scow. When a mysterious Amazon-type arrives bearing a crystal pendant and hands it over to Palme, the reanimated boy takes on her quest as his own and begins a journey to the center of the planet to deliver the glowing blue gift to its rightful owner, all the while being pursued by strange, phallic beings and an oddball assortment of enslaved mutant ragamuffins straight out of Oliver Twist (if it had been penned by Neal Stephenson instead of Charles Dickens). Nakamura’s film is awash in striking imagery both in the traditional cel animation style as well as CGI, a technique that echoes Palme’s robotic/human dichotomy to a T, but much of the film’s pleasure derives from the sheer otherworldliness of the story. Homages to everything from The Wizard of Oz to Blade Runner abound – the urchins that meet up with and eventually follow the tiny robot boy comprise a half-dozen archetypal characters that range from the giddily silly to the sublime. When it’s revealed that the pendant may have properties more suited to the dark side than any holistically benign intent, the film ratchets into a whole new level of suspense that might as well be a metaphor for the current state of global realpolitik. Whether or not Nakamura consciously decided to reach so thematically high is open to debate – online interviews with the director reveal a cagey artist unconcerned with whatever subtextual messages his audience might bring to his film – but they’re certainly there for the asking. More to the point, though, is A Tree of Palme’s unimpeachable epic qualities, a lost little nonboy searching for a heart. Brains and courage he’s already got in spades.

A Tree of Palme, Takashi Nakamura