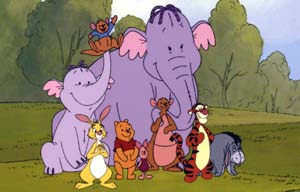 We debated whether to bring our almost 3-year-old to this traditionally animated Disney featurette – it’s so wispy and slight, it’s hardly a movie, and was originally intended as a straight-to-video release. The reasons we decided against it, ironically, are all the reasons Heffalump is worth watching: It’s not monumental filmmaking, it doesn’t fashion a fantastic alternative universe from the top down, it’s too comfortable and familiar and cozy to boldly declare “my first movie.” It’s not big and bright and busy and boffo, like the upcoming Madagascar and Robots (both of which were trailered before the screening); it’s not cutting-edge computerized entertainment for the whole family. And that, silly parents, is why Heffalump is a perfectly marvelous matinee option for young children. It’s a sweet little story, from a kid’s-eye view, about the anguish of being too little to do stuff, and its wee hero (Hopkins, as the voice of Roo) learns a great big lesson about accepting the Other, though not in a moralistic club-you-over-the-head-with-a-carrot fashion. And moms are the heroes of this movie, paws down. When titanic footprints mysteriously appear in the Hundred-Acre Wood, Rabbit (Sansom), Pooh (Cummings, winsome as ever), and the rest of the gang (except for Owl, who’s curiously absent) head into Heffalump Hollow (a dark and densely sylvan realm just beyond their own turf) to find the likely culprit, the titular purplish-pinkish elephants, who are imagined to be monstrous. Naturally, the Heffalumps fear the other animals just as misguidedly – until Roo befriends the juvenile Lumpy (Stanger, who’s got an adorable north-of-England patois). Original songs by Carly Simon ensue, though really we could do without them. (I’ll admit to misting up once. OK, twice.) Pooh purists are advised that Christopher Robin is missing, and these Heffalumps aren’t imaginary. Yet neither are there any fart jokes, and our youthful audience burst into cheers at the inevitably pleasant conclusion.