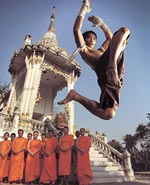 Jackie Chan, your days are numbered. Actually, they’ve been numbered for what seems like ages now as Hong Kong’s representative to the world at large has been mired in an unforgiving swamp of righteously mediocre films (The Tuxedo, The Medallion, The Increasingly Desperate Career Move) that do little to gild his rightfully legendary place in the biff-bam-pow pantheon of martial arts demigods. He’s even been – gasp! – relying on wire-work to assist him in leaping tall buildings in single bounds (although, to be fair, the mechanical devices necessary to achieve flight in so many HK productions over the years have always been, more or less, a given). Still and all, Chan hasn’t matched the career-defining chutzpah of his Drunken Master or Police Story in years, although as a pop-culture powerhouse he continues to surprise when paired with Owen Wilson in films such as Shanghai Noon and Shanghai Knights. It’s high time for a new Mr. Asskick on the scene (Jet Li notwithstanding) and with Ong-Bak, fans of martial artistry would do well to pay attention to Thailand’s newcomer Tony Jaa, who melds Chan’s populist man-of-action style to the loose-limbed acrobatics of that country’s Muay Thai. And this time, there are no wires, no special digital effects, no behind-the-scenes tomfoolery of any kind. With Ong-Bak, what you see is what you get, and what you get is a revelatory lesson in gravity and how to defeat it. What goes up must come down, sure, but in Jaa’s case, what goes up goes up again and again and again, and rarely comes down with anything less than a concussive smackdown. Ting (Jaa), a simple country boy, is dispatched to the festering city of Bangkok to retrieve the severed head of his remote village’s prized ong bak, or Buddha statue. Once there, this infinitely stoic, musclebound naïf teams up with fallen fellow villager George (Wongkamlao) and a young female college student to take on the garishly corrupt mob that nabbed the statue. From there on out Ong-Bak is nothing more than a series of sequences of Jaa monkey-bashing whoever gets in his way, which is like saying Enter the Dragon is nothing more than a film about a karate competition. The joy of this insanely fun film is in watching the resourcefulness of director Pinkaew as he puts his star through a series of murderously athletic paces that are as contrived as they are exhilarating. Jaa and Pinkaew are the real deal, and watching the improbable feats unfold – Jaa leaping pantherlike over an open-air-market obstacle course; Jaa laying waste to a hulking, obnoxious Aussie man-mountain; Jaa kicking butt with his own rear end on fire, for real – is as thrilling as watching your first kung-fu extravaganza at a Saturday afternoon Times Square grindhouse matinee. Ong-Bak would be far less agreeable if it were merely a tough-guy smash-’em-up, but Pinkaew and Jaa also infuse the admittedly goofy storyline with a genuine sense of heart: Jaa may be a badass, but he’s also an honorable young hero with noble qualities to spare and a rugged obstinate perseverance that thrusts him into the realm of the archetypal. But the best way to enjoy Ong-Bak is on its own gritty, low-budget level, skins, brains, and guts galore, a viscerally entertaining slice of Thai filmmaking that will leave you grinning ear to ear. 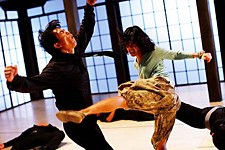 Chocolate
This spicy Thai actioner comes from the director of Ong Bak. 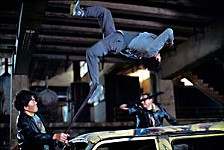