The kidhood fear of closets and beneath-the-bed beasties comes in for a good cleaning in Boogeyman, but all director Stephen T. Kay (Get Carter) can manage is a jumble sale of hoary horror clichés enshrouded by glacial pacing and a penchant for underlighting sets, which, in the hands of a more skillful team might work dreadful wonders – I couldn’t help but wonder what Tim Burton might have done with the Boogeyman concept – but here seems wholly unrealized. Berkeley Breathed’s Bloom County anxiety closet held more grim fancies than this collection of uninspired and predictable shocks, while the genuinely interesting backstory of the titular creeper is completely ignored in favor of tedious sequences involving the protagonist (7th Heaven’s Watson) engaging in staring contests with every closed door he encounters. Watson plays Tim, a twentysomething who witnessed his father’s abduction by the Boogeyman some 15 years previous. When mom (Lawless) dies, Tim returns to the family home with plans to spend the night and confront his fears in the hope of laying to rest not only his mother but also the bad dreams that never seem to go away. Once back in town, Tim hooks up with old pal Kate (Deschanel, sister of Zooey) and the mysterious Franny, a young girl who may or may not be the key to all those skeletons in all those closets. Director of Photography Bobby Bukowski has a keen eye for creating angsty images – Tim’s old home is a veritable checklist of haunted house motifs – but Kay repeatedly torpedoes the fear factor via stuttery editing and whipcord camera movements that seem to be the hallmark of directorial indecision these days. Genre fans will no doubt come expecting better thanks to the film's Ghost House production pedigree from Sam Raimi and producing partner Bob Tapert (late of Lawless’ Xena), who recently brought Takashi Shimizu’s The Grudge remake to screens and have a full slate of upcoming horror shows including a remake of Raimi’s nascent The Evil Dead. Boogeyman’s chief crime is in its lack of ambition regarding the history of the Boogeyman – Eric Kripke’s script makes zero of the historical origins of the one very bad apple that lurks in every child’s bedroom regardless of culture or locale. The primal fear of the unseen thing under the bed has lately been remastered for a new generation by a host of Asian directors, including the Pang brothers (The Eye), Hideo Nakata (Ringu), and Shimizu, and while Kay’s film generally has the look and feel of an old dark house horrorthon, there’s simply not much else to it beyond a brief and unrealized subplot about all those missing kids emblazoned on the back of your morning milk being the victims of Boogey-napping. Even the should-have-been-triumphant revelation of the Boogeyman arrives as a CGI letdown of epic proportions. Kay, all grown up now, appears to have unfortunately forgotten what scared his childhood self in the first place. 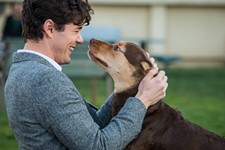 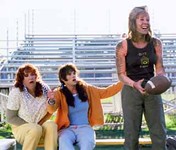 Sorority Boys
The filmmakers would have us believe that their new cross-dressing comedy Sorority Boys is Some Like It Hot by way of Animal House. The truth ...