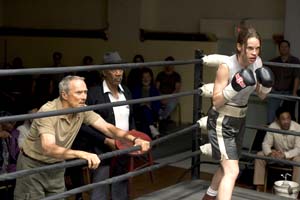 There shouldn’t be any question about whether Clint Eastwood has earned his place in the pantheon of American cinema. Until the last decade or so, the mention of his name first summoned a visualization of a film icon: the squinting loner wandering the barren landscapes of the Old West or a renegade cop dispensing his own brand of justice in the lawless streets of a modern-day frontier town. Though he has directed films since the early 1970s – some of them pretty good (The Outlaw Josey Wales, Pale Rider, and Bird, to name a few) – he’s always been perceived as an actor first and a filmmaker second. That, however, has all changed. Over the years, Eastwood has become the consummate filmmaker, an artist of uncompromising integrity with few equals in a profession seemingly more interested in computer-generated imaging than the depth of human experience. While that may be a lofty description of someone who’s made a movie career as a man of few words, you need only consider Eastwood’s directorial work in Unforgiven, The Bridges of Madison County, Mystic River, and now Million Dollar Baby to appreciate the truth of the statement. On the surface, the underdog theme in Million Dollar Baby is a familiar one, the notable difference being that this time the story is set in the unfamiliar world of female boxing. The movie’s central relationship is between Frankie Dunn (Eastwood), a grizzled manager/trainer who owns a run-down gym for wayward pugilists, and Maggie (Swank), the determined young fighter he reluctantly agrees to show the ropes. The dynamic between these two is initially a comic one – he plays the crotchety old man to the hilt, while her eager pupil appears oblivious to his act – but in their mutual loneliness, a tender father/daughter bond forged in devotion and loyalty eventually develops. And so when the film executes an out-of-nowhere left hook and takes the narrative in a different direction, you can’t help but feel betrayed by Eastwood and screenwriter Paul Haggis for undermining expectations about how this will all turn out. From this point on, Million Dollar Baby transcends the rules of the genre and shows us, with an unvarnished simplicity, how human beings struggle to come to terms with the unthinkable. The three principals – Eastwood, Swank, and Freeman, who narrates the film in the role of an ex-prizefighter who long ago missed his chance at greatness – give as natural and honest performances as you’re likely to see in a long time. They (and Swank in particular) inhabit these characters to the point that you no longer see the actors playing their parts. Swank finally shows us that her turn in Boys Don’t Cry wasn’t a once-in-a-lifetime fluke, while Freeman’s lovely performance fits this glorious actor like a glove. (Isn’t it time that he finally won an Oscar?) As for Eastwood? Well, his portrayal of a regretful man who opens his heart in an act of self-redemption is the best thing he’s ever done, bar none. For years, Eastwood’s acting technique emphasized the enigmatic and inscrutable to the point of near-caricature, but now he’s eliciting exemplary performances as a matter of course from everyone in his films, including himself. In keeping with his performance in Million Dollar Baby, Eastwood’s confident direction doesn’t try to wow you with the bells and whistles that have come to dominate so many directorial visions. Watching how he structures shots, directs actors, and paces scenes, you’re struck – no, awed – by the economy and assuredness of everything he does. Unlike other filmmakers in the autumn or winter of their careers, Eastwood doesn’t seem content to rest on his laurels and give his audiences the tried and the true. For that reason, among many others, he and Million Dollar Baby are true champions.