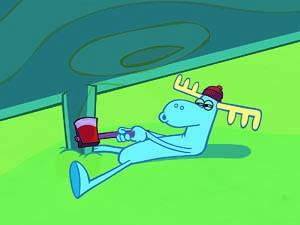 Has it really been 15 years since Craig "Spike" Decker and the late Mike Gribble initiated this surprisingly durable cavalcade of objectionable animations and crass anti-commercialism? It has, but what’s most remarkable about their annual parade of gag-reflex-inducing animations isn’t that it’s still around, but that it’s maintained a stubborn sort of unflappable continuity, marked by occasional stumbles into the realm of genius. In the past, Spike & Mike has played host to, or discovered, the work of Beavis and Butt-head’s Mike Judge, The Powerpuff Girls’ Craig McCracken (whose "No Neck Joe" is an inexplicable perennial audience favorite, again), Bill Plympton, and the semilegendary Don Hertzfeldt, who’s currently debuting his epic new short at Sundance. Hertzfeldt, most of all, embodies the Spike & Mike ethos of comedy + tragedy = better comedy. That animator’s simple stick-figure drawings maintain an almost existential air of self-knowledge and despair that approaches the Kafkaesque in sheer, mundane dread. Check out his glorious "Oh, L’amour" if you don’t believe me, or, better yet, catch his thus-far masterpiece "Rejected," which is back this year and remains the smart, angsty highlight of the show. That said, Spike & Mike has always been a hit-or-miss anthology program, with wildly unfunny bits bookended by more interesting examples of what mad, bad, dangerous-to-know animators get up to when they’re not dreaming Pixar dreams or wondering how to pay the rent this month. This year is no different, which is in itself a strangely comforting thought, with three or four genuinely brilliant pieces surrounded by various examples of puerile fun and juvenile humor that make Judge’s MTV work look like the height of intellectual introspection. Notably, Kurt Nellis’ "The Boy Who Could Smell the Future," which parodies Fifties-era sci-fi and Red Scare films and clocks in at a brief 90 seconds, is pure, one-gag schtick, lovingly rendered (it’s CGI) and abrupt enough to elicit shocked howls of laughter. Then there’s this year's pièce de résistance (from France, natch), Arthur de Pins' "The Crab Revolution," a stunningly original little high-contrast black-and-white animation about the woeful fate of seaside crabs that manages to be smart, distressing, and very French all at the same time. Stylistically, it’s neither sick nor twisted, but it has a subtle charm all its own. It’s unlike anything else on the program this year. Gore is big, and Mondo Media’s "Happy Tree Friends" milks the severed tit of sorrow for all it’s worth and comes up with no less than three mini-installments of the zany animals-in-jeopardy (with their viscera hanging from trees) school of comedy that give The Simpsons’ Itchy & Scratchy a run for their entrails. Is it comedy? Or grand guignol? Does it matter? Not really: Dead cute things are always funny. Then there are the also-rans, like Bill Plympton’s "Crazy Cock," from his film Hair High (which played South by Southwest 2004), a far cry from the animator’s great "Plymptoons" days. Toby Grauberger’s video game parody "Baby Hunter" feels less like a comic idea than a demo reel (never a good thing), while Eric Merola’s "Fly Boy" leaves you wondering where the Black Flag is. There’s no shortage of good animation here, but blood and butts don’t necessarily translate into anything you’re going to want to screen more than once. Funny animals dying horribly is always, apparently, kickass comedy.