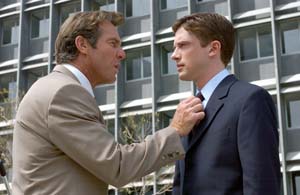 As he’s aged, Dennis Quaid has lost some of the cocksureness and swagger that defined his early roles, and he’s become a more appealing actor for it. The sly grin’s still there, but less so the smarm, and Quaid’s been a joy to watch in this midlife renaissance that began with Far From Heaven and The Rookie. The projects he’s settled on since then have felt a little beneath him – but then what better way to ensure, again and again, that an actor will emerge the best thing out of a bad situation? And so it goes with In Good Company, a sincere but serviceable-at-best dramedy from Paul Weitz. Weitz is one-half of the fraternal team that has presented us with two studies on the development of the human male (for adolescent horndog stage, see American Pie; for Peter Pan syndrome, About a Boy). Here, flying solo, writer/director Paul Weitz tackles two men in transitional disarray: Quaid’s family man and ad exec Dan Foreman, and the young Turk who becomes his boss post-corporate merger, 26-year-old Carter Duryea (That '70s Show’s Grace). Dan, used to being the big man in the room, is humiliated at work by Carter, a kid half his age whose boardroom speak is an amalgam of fortune-cookie platitudes and frat-boy dudeisms. What Dan doesn’t know is that Carter is sweating it – racked with doubt, friendless, fighting tooth-and-nail for respect, and sleeping on the office couch ever since his trophy wife left him. Weitz’s concept – midlife crisis meets quarter-life crisis, butts heads, finds common ground – isn’t a bad one, and In Good Company at first projects a gentle, fuddy-duddy sort of charm. The opening scenes establishing Dan at home, as the lone outpost of testosterone in an estrogen sea of wife Ann (Helgenberger) and two daughters, are funny and sweet, and his initial clashes with Carter are believably tense; Quaid deftly hits every note in a complicated bouquet of pity, disgust, indignance, self-loathing, and survival instinct. But when the workplace friction between Carter and Dan begins to repeat itself (with diminishing returns), Weitz introduces a subplot that feels like a sitcom stunt – Carter on the sly starts to date Dan’s comely daughter (Johannson) – and, instead of resuscitating the picture, acts like the last pinprick to a fatally leaking balloon. Grace and Johannson’s courtship has all the heat of a wet wipe and, worse yet, leaves Quaid offscreen for long stretches. Mathematically speaking, there’s just no room for Pops in this equation, which is a shame, because Quaid was the best thing in what is, if not quite a bad situation, ultimately a rather boring one.